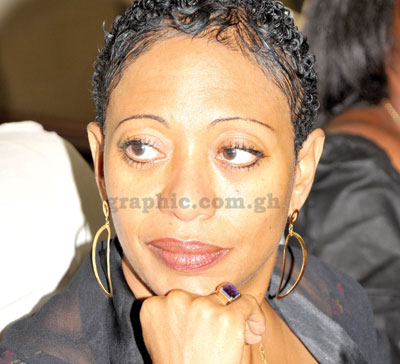 These are some of the values that guide the members and leaders of the Convention People's Party (CPP) and thus at the beginning of this administration, we were determined to ensure that these guiding principles are restored at the heart of all that we do.

They are also some of the principles that will guide the CPP when we come to government, in dealing with failures in governance such as misappropriation of funds in public institutions and judgement debts.

According to the Chairperson and leader of the CPP, Ms Samia Yaba Nkrumah, the CPP's ongoing reforms are part and parcel of a commitment we made after the 2012 elections to restructure, rebrand and rejuvenate the party. Invariably, this has involved a review of election performance, including campaign strategy, finances, administration and structures.

In a signed statement, the party said, “It is in furtherance of these goals that the elected leaders of the CPP, backed by the Central Committee, initiated the creation of a fact-finding committee specifically to look at all the issues around resource mobilisation and allocation during the 2012 election campaign, especially after a hectic campaign season where many of our leaders where themselves candidates.”

I take this opportunity on behalf of the leadership and the entire party to commend the efforts of the members of the fact-finding committee for their dedication in carrying out this exercise on behalf of the party. We welcome the recommendations of the fact-finding committee and we are committed to implement them to further entrench transparency and accountability to our members in particular and Ghanaians in general.

It is most disconcerting, however, that an exercise in establishing truth, which is the best example of internal party transparency, has been misrepresented by the front page article of the Daily Graphic of June 20, 2013 alleging that the fact-finding committee has indicted leading members of the CPP for failing to account for election funds.

As Chairman and Leader of the party, I see this as another attempt to discredit the CPP and foment discord within our midst. I want to assure our membership that we are determined to push ahead with the reforms in our operations.

We have written to the Daily Graphic and I will be seeking a meeting with the Editor and the management of the Daily Graphic to make our views known and discuss with them how they meet their constitutional duties without distorting facts.

Given the mood of our country and the disenchantment with politics and politicians, it is clear that what the CPP is doing internally is a constructive path that will offer the country a credible alternative and earn us the trust of Ghanaians.

In the first place, the Daily Graphic welcomes the rejoinder from the CPP as it is in accordance with the Fourth Republican Constitution.

In addition, we want to assure the leadership of the CPP that the doors of the Daily Graphic are wide open to accommodate them anytime they decide to call on the management of the GCGL and the editorial team led by the Editor.

It is, however, regrettable that the leadership of the CPP chose the option of pouring invectives on the Daily Graphic team as though it set up the committee to investigate the use of campaign funds, and authored the report of the fact-finding team.

We remind the CPP and the entire country that the Daily Graphic is conscious of its mandate to hold public office holders and those who seek the mandate to govern accountable for their actions without name-calling.

Let the CPP and especially their Communications Director establish where and from whom the Daily Graphic took “huge sums of money” to cause “mischief” in the CPP or face the full wrath of the law in our attempt to maintain the credibility of the Daily Graphic as the flagship of the nation.

The Daily Graphic did not break any canons of journalism in the dissemination of the information on the fact-finding committee’s report on the campaign funds of the CPP. Indeed, the reporter contacted all the parties mentioned in the report but instead of explaining issues to him, the Chairperson, Ms Samia Yaba Nkrumah, declined to comment on the matter.

Perhaps, our only crime is that we made the fact-finding report public otherwise we do not see any law that we have breached.

We serve notice to the CPP and Nii Armah Akomfrah to substantiate his claim that “huge sums were paid to the journalists at the Daily Graphic to do what they did” or retract with an unqualified apology.