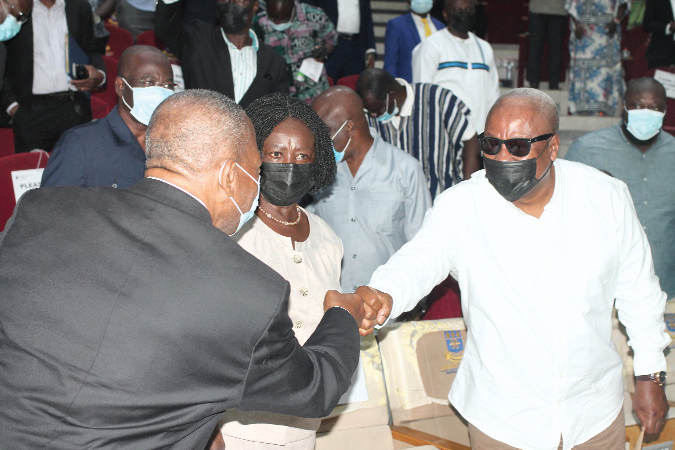 Former President John Dramani Mahama has called on the government to constitute a national forum on the economy to find lasting solutions to the country's economic challenges.

“The seemingly intractable problems we face and the vicious cycle they continue to perpetuate should compel us to create room for more consultation and deliberation among competing political forces and ideologies,” he said.

Speaking at a lecture dubbed: “State of the Economy: the Score Card’ at the Cedi Conference Centre of the University of Ghana in Accra yesterday, the former President said such concensus was demonstrated when his administration convened the Senchi Economic Forum, leading to the formulation of the Senchi Consensus.

The lecture was organised by the Professionals Forum (PROFORUM) of the National Democratic Congress (NDC), in collaboration with the Centre for Ethical Governance and Administration (CEGA), to assess the country's economic climate.

PROFORUM is a group of professionals who believe in the social-democratic ideals of the NDC, while CEGA is a civil society organisation.

Mr Mahama said sitting down with political opponents to find a common ground and thinking through national problems was not an admission of defeat nor helplessness.

“It is a demonstration of maturity and statesmanship, oozing out of a shared desire to see our nation progress, irrespective of the colour of those who govern at a particular point in time,” he said.

Launching attack on the Akufo-Addo-led government saying it had plunged the economy into crisis, the former President, who was the NDC’s presidential candidate in the 2020 elections, noted it was time for the government to accept its shortfalls, rather than hide under the flimsy excuse of COVID-19.

Explaining, he said it was the mismanagement of the economy and thirst for consumption expenditure and the desire to spend beyond the country’s means in order to win elections that had plunged the country into the current crisis, not necessarily COVID-19.

“COVID-19 has become the convenient whipping boy and has been cited as the reason for the crisis we face now and the attendant economic hardships. Yes, COVID-19 affected the economy, and no one can dispute that. It is, however, not the main reason we are in the current hole we find ourselves.

“COVID-19 only became a pretext for reckless election-related spending, which produced the largest-ever budget deficit in the recent economic history of Ghana last year,” the former President said.

Mr Mahama again took on the Akufo-Addo administration for its borrowing describing it as “reckless”.

He said the country’s debt had ballooned to unsustainable levels and had topped 80 per cent of Gross Domestic Product (GDP), which had exposed the country to very high risk of debt default.

“Almost all of our tax revenue is used to service our debt and the effect has been the introduction of several new taxes. This has led to rampant increment in the prices of goods and services. This is primarily responsible for the hardship Ghanaians are going through now,” he said.

He observed that a comparison with the country’s neighbours and peers in sub-Saharan Africa showed that although they had battled with COVID-19 and protected citizens, they had, unlike Ghana, avoided increasing their debts and deficits because of more prudent management of their economies.

Mr Mahama said the Akufo-Addo administration had no basis to under-perform because it had been the luckiest government in the Fourth Republic.

“They have benefitted from 60 per cent of all the oil revenue accruing to Ghana since we began producing oil; they have had more than twice the total tax revenue available to us and have enjoyed unprecedented support from our development partners.

“They had access to over $200 million from the Stabilisation Fund we set up and got central bank financing of GH¢10 billion, whereas we had zero financing from the central bank in 2016, despite all our challenges,” he said.

Touching on how his administration had handled that economy, Mr Mahama said when his government was confronted with similar challenges, it put in real effort to address them comprehensively and laid down critical structures that had become some of the most important pillars supporting the economy.

“We passed the Petroleum Revenue Management Act] under which we set up the Stabilisation and Heritage funds with about $500 million in them at the time we left power in 2017.

“We tackled the power crisis too head-on, and by the time we left office in January 2017, we had sufficient generation capacity to withstand future shocks,” he said.

Mr Mahama added that the NDC administration brought stability and reliability to fuel supply for power generation when it built the Atuabo Gas Plant to process gas and also set up the Energy Sector Levy Act (ESLA), which by 2024 should yield up to GH¢40 billion.

“This stands us in good stead to overcome the stifling legacy debts in the energy sector and help address the liquidity challenges in the sector. We set up the Ghana Infrastructure and Investment Fund to mobilise capital to undertake major infrastructure projects and one of its first success stories is Terminal 3 at the Kotoka International Airport,” he said.

In addition, he mentioned the establishment of the Ghana Exim Bank, the Sinking Fund and the Contingency Fund as sound economic policies that helped in the recovery of the economy.

Earlier, a former Minister of Finance, Mr Seth Terkper, had said the Mahama-led government was a better manager of the economy and if the current government had taken advantage of the sound economic policies that it implemented, the country could have avoided falling into a bad economic situation.

He said the path to sustaining fiscal macroeconomic performance should matter most across administrations to help keep the economy out of crisis.

“We brought stability to the energy sector and left about $500 million in the fund before leaving power,” he said.

The lecture, which lasted about four hours, brought together members of the PROFORUM, including its Chairman, Mr Sam Pee Yalley, and was chaired by Prof. Lord Mensah of the University of Professional Studies, Accra.