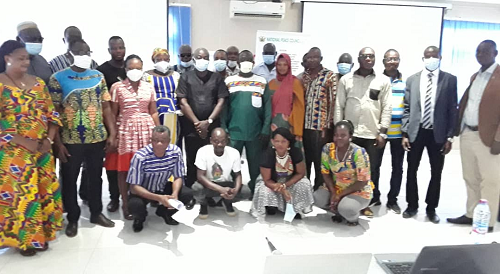 The Upper East Regional Peace Council has called on political parties in the Region to commit themselves to the Road Map for the eradication of political vigilantism and the code of conduct for political parties.

That according to the Council will ultimately forestall the occurrence of violence before, during and after the December Polls.

At an Advocacy Campaign on the eradication of political vigilantism in Ghana organized by the Council with funding from the Danish Embassy, at Bolgatanga on Wednesday, October 14,2020,the Upper East Regional Chairman of the Peace Council, Alhaji Sumaila Issaka pointed out that the outcome of this year's elections should not be different from the previous elections held in the country.

“We call for smooth transition because it looks like the stakes are too high for this year's elections; political parties must reach a consensus on issues having gone through the elections seven times already," Alhaji Issaka stressed.

He urged the parties in the Region to come out clearly on issues that affect them for their resolution before the elections.

The Executive Secretary of the Upper East Region Peace Council, Mr Ali AnanKpieng, observed that since 1992,47 percent of elections recorded some form of violence with some of them very serious.

Mr Anankpieng further revealed that Ghana held about 30 by-elections with 13 of them recording violence.

“Looking at these issues should we say it is a success or failure?” he asked.

He explained that in the past the country cited other countries where violence had occurred but now “we have examples here in our own country”.

“I have spoken to people and they are yet to take a decision on whether or not to vote in the elections; and the main reason for them is the likelihood of violence on election day," the executuve secretary noted.

He therefore entreated political parties and other stakeholders to support efforts to ensure a violent  free elections because "I believe that our political parties themselves have the enormous benefits if the electorate come out in their numbers to vote for them".

A Board Member of the National Peace Council (NPC), Mr Shaibu Abubakar observed that trust was key in ensuring a peaceful election saying “let us not do anything to mar the elections”.

The Regional Director of the Electoral Commission (EC), Mr William Obeng Adarkwa appealed to political parties to respect and trust the institutions mandated by the constitution to conduct the elections in a peaceful manner saying “ let us not double in rumours to breed mistrust in our democratic institutions".

“As political parties you have a herculean task to bring the activities of your supporters and followers under control to promote peaceful elections,” Mr Adarkwa further pointed out.

In a speech read on her behalf,the Regional Minister, Miss Tangoba Abayage stated that “the seeming mistrust for state agencies mandated to carry out peaceful elections led to vigilantism”.

She appealed to the youth in the Region to stay off violence in the run up to the December polls.

The participants drawn from political parties, the National Commission for Civic Education, the Peace Council, Civil Society Organizations, Non-governmental Organizations and the EC among others discussed the Road Map for the eradication of political vigilantism in Ghana,the Code of Conduct for political parties,the Vigilante and related offences Act,2019(Act 999),early warning signs and political hotspots in the region.

Representatives of three political parties, the National Democratic Congress,the New Patriotic Party and the People's National Convention pledged to educate their respective party members and supporters about political vigilantism and the need to ensure a peaceful election.