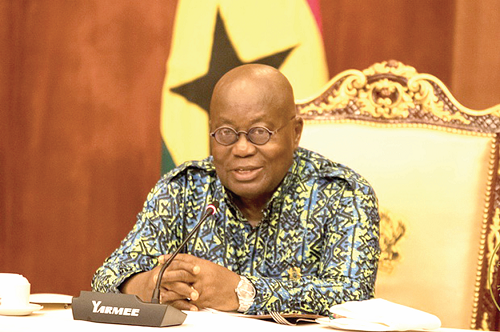 President Nana Addo Dankwa Akufo-Addo has reaffirmed the government’s commitment to improving the well-being of the people in the Bono East Region and the country at large.

He said on assumption of office, he assured the people of Ghana he would focus on their welfare and would, thus, not relent in pursuing such a laudable agenda to ensure its success.

President Akufo-Addo gave the assurance when he addressed the chiefs and people of the Kintampo North Municipality to mark the start of his two-day working visit to the Bono East Region.

The visit was to commend the people for trusting him with a second term in governance and to have a first-hand information about their welfare, he said.

The President also wanted to know the progress being made regarding the implementation of socio-economic development projects in the region.

He said the municipality was noted for its high cashew cultivation and pledged to continue to support farmers with inputs and materials to boost their business.

The Paramount Chief of Mo Traditional Area, Nana Adjei Adinkra, on behalf of the chiefs in the municipality, commended President Akufo-Addo for his high sense of creativity, initiative and introduction of pragmatic policies and programmes that had positively impacted the livelihoods of the people.