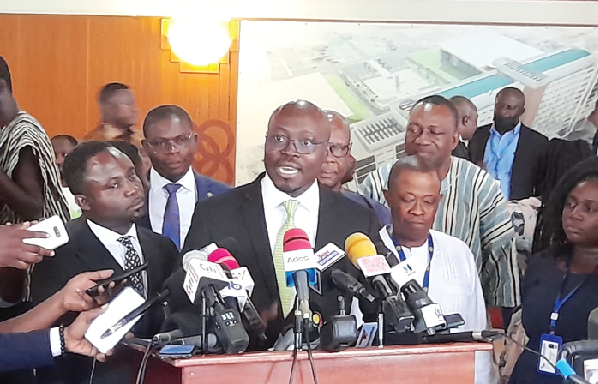 The mid-year budget review was not candid and truthful to Ghanaians about the economic challenges facing the country, the Minority in Parliament has said.

According to them, the country was in serious economic crisis, to the extent that its debt was unsustainable, but the Minister of Finance, Ken Ofori-Atta, failed to speak the truth to encourage Ghanaians to buy into the problems confronting the nation.

“I am disappointed in the statement by the minister. I think if the country is in crisis, to extent that your debt is unsustainable, then when you appear before Parliament, first you have to speak the truth to get the public buy-in,” the Ranking Member on the Finance Committee of Parliament, Dr Cassiel Ato Forson, said.

Addressing the press shortly after Mr Ofori-Atta had presented the mid-year budget review to Parliament yesterday, Dr Forson, flanked by some members of his caucus, said: “Everything is not working, yet the Minister responsible for Finance appeared before us and said nothing. He failed to address the very concerns of ordinary Ghanaians.”

Dr Forson said he was shocked that the government felt every challenge facing the country must be confronted with debt.

Such thinking, he said, largely contributed to the country’s public debt that was today in excess of GH¢400 billion but which the Finance Minister failed to talk about.

“I thought he would take the opportunity to address debt restructuring,” he said, adding: “Today, Ghana is a highly indebted middle-income country and our position is worse than the HIPC days.”

The Ranking Member further said when the 2022 budget was read in November last year, it got investors very jittery, as a result of which they started exiting Ghana’s market.

Today, he said, the Finance Minister’s mid-year review of the 2022 budget was worse, describing the document as “nothing but empty”.

“How possible is it that at the time you have revised your revenue down to GH¢3.7 billion and you have cut expenditure by only GH¢1.8 billion, which means the net effect is that you are increasing your fiscal deficit by GH¢2 billion, he tells us the fiscal deficit is coming down?” he quizzed.

The Ranking Member also recalled that Mr Ofori-Atta told the House that GDP growth for 2022 had been revised from 5.8 to 3.7 per cent, saying: “I bet to say that he cannot even achieve the 3.7 per cent.”

He pointed out that Fitch had given information that the GDP growth for 2022 for Ghana would be 2.5 per cent, which would be the worst in the history of the country.

Dr Forson accused the government of encouraging the Bank of Ghana to print currency totalling GH¢22 billion without parliamentary approval.

According to him, the currency notes were printed between January and June 2022, explaining that the information was hidden on page 97 of Appendix 2a of the Mid-year budget under the section on the Bank of Ghana.

“They have printed GH¢22 billion fresh money without the knowledge of Parliament and without informing all of us,” he said.

Describing the development as against the Bank of Ghana Act, Dr Forson said the printing of the currencies had been a contributory factor to the galloping inflation.

“No wonder inflation is galloping, no wonder that our reserves position is dwindling. Because when you create new money out of thin air, what happens is that inflation will go up, and obviously because it is new money, you will end up losing your reserves because there will be new consumption,” he said.

“If this trend continues, I won’t be surprised that we will end the year with inflation of about 50 per cent,” he said.

Reacting to the mid-year budget review on the floor of Parliament, the Minority Leader, Haruna Iddrisu, said the minister failed to give hope and a clear path of how the government intended to cushion the people against the rising cost of living, the escalating cost of doing business and extreme poverty.

He told the House that Mr Ofori-Atta was seeking to vary interest payment from GH¢37.4 billion (7.5 per cent of GDP) to GH¢41.3 billion (7.0 per cent of GDP), a development over which he expressed the Minority’s intention to raise procedural issues to guide the House.

“Mr Speaker, is this a matter over which a mere statement from the Minister of Finance allows him to adjust appropriation?” he asked, citing how the existing Appropriation Act gave the minister the mandate for only GH¢37 billion.

Mr Iddrisu accused the Finance Minister of nurturing the intention to re-introduce road tolls through the back door.

The Majority Leader, Osei Kyei-Mensah-Bonsu, denied the assertion by the Minority Leader that the Finance Minister intended to use the mid-year review to introduce new road tolls.

“Read what is there and do not mislead Ghanaians; the truth of the matter is we all do acknowledge that as a nation we have not been reaping enough from road tolls.

“Due to the damage that was done at the tollbooth area, it was decided that we should do away with road tolls for the time being. No law made is sacrosanct,” he said.

Mr Kyei-Mensah-Bonsu explained that what the government intended to do was electronically re-introduce road tolls.