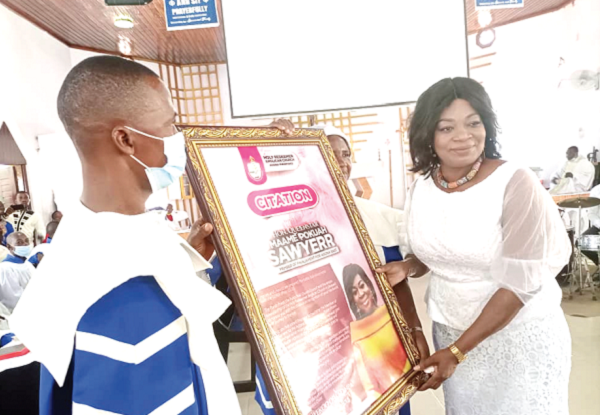 The Holy Redeemer Anglican Church at Agona Kwanyako has honoured the Member of Parliament (MP) for Agona East in the Central Region, Mrs Queenstar Maame Pokuah Sawyerr, for her outstanding service and contribution to the growth and development of the area since assuming office in 2012.

Mrs Sawyerr, a member of the church, was honoured by the church during a special thanksgiving service held in her honour last Sunday, after securing a third term victory in the December 2020 presidential and parliamentary elections in the constituency.

Accompanied by family members, party supporters and well-wishers, Mrs Sawyerr thanked God for His protection, love and support since she recaptured the parliamentary seat for the National Democratic Congress (NDC).

Mrs Sawyerr, since assuming office, has undertaken a number of interventions and initiatives that have made great impact on the lives of the constituents. Notable among them are the construction of about 43 community centres for some rural communities to provide a conducive environment for social gatherings and other events.

Also, she has instituted a loan scheme to assist, particularly, market women, to either start a trade or expand their businesses to be able to improve their standard of living as well as boost the local economy.

Furthermore, through her instrumentality, many classroom blocks and dormitories have been constructed in senior high and basic schools to enhance the delivery of quality education to school pupils.

Additionally, she is providing financial support to many tertiary students to acquire needed skills and knowledge to come back to support the constituency’s growth as well as a soon to be launched health project where a health mobile van with health professionals would visit remote communities to take care of the health needs of the people.

According to the Parish Priest of the church, Venerable John Justice Adu Acheampong, Mrs Sawyerr had shown leadership in what many women struggle to achieve, and described her remarkable victory in the just ended presidential and parliamentary elections as unmatched which affirmed her motto :“My God is good”.

He said the church and its membership were pleased to recognise her remarkable achievements and contribution to the Anglican Communion and to honour her as well as bless the Lord Almighty for his goodness and mercies over her life”.

In her response, Mrs Sawyerr expressed her profound gratitude to the church for the honour and recognition as it would bolster her to further deliver leadership that would inspire confidence in the people.

She called on the constituents, including chiefs, to put aside their political affiliations and rally behind her to attract the needed investments and developments that would provide decent jobs for the teeming unemployed youth in the area.

“We must avoid fighting among ourselves in the name of politics but rather come together to fight against poverty across the constituency to make life bearable for the people” Mrs Sawyerr noted.