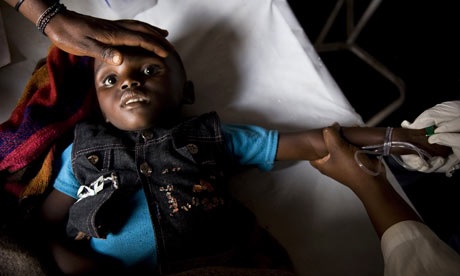 A global health study published in The Lancet medical magazine provides the clearest picture of the causes and impact of diarrhoeal diseases – the second leading cause of child deaths globally – and reveals new opportunities for intervention.  The three-year Global Enteric Multicenter Study (GEMS) is the largest study ever conducted on diarrhoeal diseases, enrolling more than 20,000 children from seven countries across Africa and Asia.

The findings were consistent across study countries, and provide crucial data that can inform approaches to combat diarrhoeal diseases in Ghana and globally. (About 5,000 children under five die from diarrhoea each year in Ghana.)

Prof Fred Binka, Vice-Chancellor of the University of Health and Allied Sciences, was a co-chair of the GEMS International Strategic Advisory Committee.
GEMS, coordinated by the University of Maryland School of Medicine’s Center for Vaccine Development, confirmed rotavirus – for which a vaccine already exists – as the leading cause of diarrhoeal diseases among infants and identified other top causes for which additional research is urgently needed.

GEMS found that approximately one in five children under the age of two suffer from moderate-to-severe diarrhoea (MSD) each year, which increased children’s risk of death of 8.5-fold and led to stunted growth over a two-month follow-up period.

“Until now, comprehensive data on the burden of diarrhoeal diseases in Asia and sub-Saharan Africa has been limited,” said Dr. Myron M. Levine, GEMS Principal Investigator and Professor at the University of Maryland School of Medicine. “By filling critical gaps in knowledge, we hope GEMS will help countries across these two highest-burden regions focus their efforts to improve child health.”


Despite many causes, GEMS found that targeting just four pathogens could prevent the majority of MSD cases. Expanding access to vaccines for rotavirus, the leading cause of MSD among infants at every site, could save hundreds of thousands of lives. Likewise, GEMS data suggests that accelerating research on vaccines, treatments and diagnostics for the three other leading pathogens – Shigella, Cryptosporidium and ST-ETEC, a type of E. coli – could have a similar impact.

Prior to GEMS, Cryptosporidium was not considered a major cause of diarrheal disease and as a result there is currently little research on this pathogen underway.

“The GEMS findings help set priorities for investments that could greatly reduce the burden of childhood diarrheal diseases,” said Dr. Thomas Brewer, deputy director of the Enteric & Diarrheal Diseases team at the Bill & Melinda Gates Foundation, which funded the study. “Vaccines and treatments available today can save thousands of children right now but targeted research to develop new tools to combat severe diarrhoea could save many more lives in the future.”

The GEMS findings also suggest that longer-term monitoring and care of children with diarrhoeal diseases could reduce mortality and developmental delays.
Children with MSD grew significantly less in height in the two months following the diarrhoeal episode when compared with children without diarrhoea, and were 8.5 times more likely to die over the course of the two-month follow-up period. Notably, 61 percent of deaths occurred more than a week after the initial diarrheal episode, with 56 percent of deaths happening after families had returned home from a healthcare facility.

“GEMS strongly indicates that follow-up care after the initial diarrhoeal episode is critical to protect the health and wellbeing of children,” said Professor George Griffin, Senior Co-Chair of the GEMS International Strategic Advisory Committee and Professor at St. George’s, University of London. “By focusing only on the acute diarrhoea that brings children to hospitals, we overlook a significant portion of diarrheal diseases’ burden.”

Expanding access to existing interventions that protect against or treat all diarroheal diseases, including oral rehydration solutions, zinc supplements, clean water and sanitation, can save lives and improve the health of children immediately.

“GEMS is a landmark study for the child health community,” said Prof Binka. “By using consistent methods across countries, GEMS sites generated data that can guide evidence-based decision making at both the local and global levels.”

Release of the GEMS findings follows last month’s announcement by the World Health Organisation and United Nations Children’s Fund (UNICEF) of the first-ever Integrated Global Action Plan for the Prevention and Control of Pneumonia and Diarrhoea (GAPPD). The GEMS findings add to the scientific evidence cited in the GAPPD strategy for effectively controlling pneumonia and diarrhoea, which together are the two leading causes of death among young children globally.