World Hearing Day celebrated with screening of babies at KATH 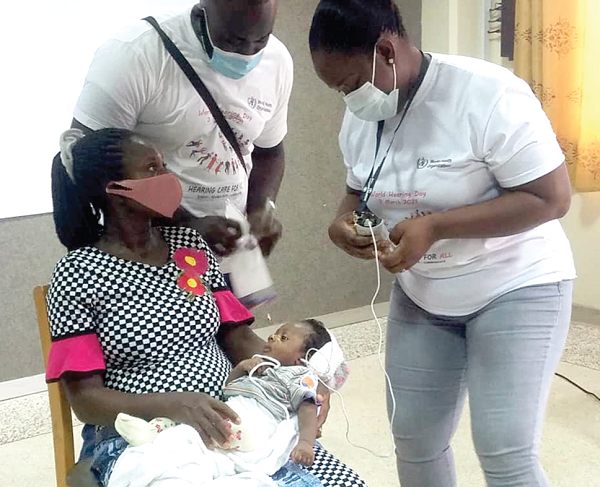 A child being tested for hearing impairment
30.5k Shares

The Komfo Anokye Teaching Hospital (KATH) in Kumasi has started a programme to screen all newborn babies to identify those with hearing impairment for early treatment as part of activities to mark this year’s World Hearing Day.

The Head of the Audiology Unit of KATH, Dr Mrs Akosua Prempeh, said the programme was deliberately planned to help save newborns from developing hearing impairment diseases, which usually manifested when they were between the ages of two and three.

"In Ghana, on the average, hearing loss is identified when the child is about two to three years old and is unable to speak well. This happens because hearing loss is an invisible handicap which often goes unnoticed until delays in speech and language development becomes apparent," she added.

According to her, hearing loss affected about 466 million people worldwide, out of which five per cent, constituting 34 million were children.

Dr Prempeh was speaking at this year's World Hearing Day (WHD), which is marked globally on March 3, every year.

It was on the theme: “Hearing care for all, screen, rehabilitate, and communicate."

Dr Prempeh said the initiative would be sustained and replicated nationwide to save the "ears of children."

She entreated the Ghana Health Service and the Ministry of Health to make affordable hearing aids available to patients to facilitate their rehabilitation and integration in society.

The Head of the Ear, Eye, Nose and Throat (EENT) Directorate, who is also a consultant surgeon at the unit, Dr Anna Konney, said the event was also to raise awareness of how to prevent deafness and hearing loss by promoting ear and hearing care across the world.

She said the programme should be taken seriously to reduce cases in children.

According to Dr Konney, hearing loss and its related ear diseases could be addressed if identified on time for proper care.