‘Breast cancer can be cured if reported early’ 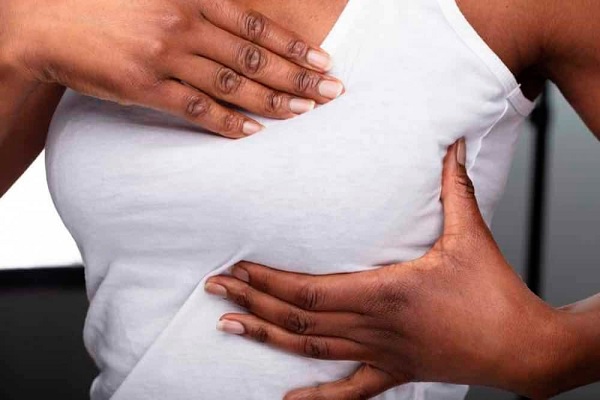 There’s need for regular examination of the breasts Follow @Graphicgh

October is here with us again and you will come across a lot of people, particularly healthcare professionals wearing pink ribbons.

This is to commemorate October as the Breast Cancer Awareness Month.

The theme for this year is "Give hope. save lives".

Worldwide, Breast cancer is the most frequently diagnosed life-threatening cancer in women.

In less-developed countries, it is the leading cause of deaths from cancer in women, surpassed only by lung cancer in advanced worlds.

I dedicate my column for this month to throw the spotlight on breast cancer.

In Ghana, breast cancer is the commonest cancer and the leading cause of cancer deaths.

Sadly, over 60 per cent of women with breast cancer in Ghana report late or have their treatment delayed accounting for this huge mortality rate.

Many people with early breast cancers are without symptoms.

Pain or discomfort is not the usual symptom, often detected as an abnormality on a mammogram before it is felt by the patient or healthcare provider.

Almost all cases of early breast cancer can be cured with the right treatment if reported early, diagnosed early and treatment started.

The exact cause of breast cancer is not known, however, studies have identified a number of risk factors associated with an increased risk of a woman developing breast cancer.

These include;
Age and gender — Increasing age and female sex are established risk factors for breast cancer.

Although breast cancer is increasingly becoming common in women younger than 40 years, the risk increases significantly after 40 years.

The lifetime risk is up to four times higher if a mother and sister are affected, and it is about five times greater in women who have two or more first-degree relatives with breast cancer.

Reproductive factors and steroid hormones — Late age at first pregnancy, inability to conceive, early onset of menses and late menopausal age have all been consistently associated with an increased risk of breast cancer.

High estrogen - a hormone found in high levels in females has been associated with an increased risk of developing breast cancer.

The risk appears to decrease with age and when the oral contraceptives were stopped.

The risk of developing breast cancer returns to that of the general population 10 years after cessation of the oral contraceptives.

Lifestyle risk factors — The wide variability of breast cancer incidence around the world has long been attributed to differences in dietary intake and reproductive patterns.

In general, breast cancer rates differ according to the level of industrialisation.

As the developmental status of the country increases, the cases of breast cancer also increases.

Diets rich in grains, fruits and vegetables; low in saturated fats; low in calories and low in alcohol are thought to be protective against breast cancer.

Obesity is associated with an increased risk of breast cancer development.

This stems from the fact that most of the causes of obesity i.e western dietary pattern, sedentary lifestyle, regular use of alcohol are all linked to an increased incidence of many cancers including that of breast.

Epidemiologic studies have consistently found a positive relation between increasing risk of developing breast cancer and early-life exposure to such as diets, obesity and body size although the mechanism of this relation is poorly understood.

This email address is being protected from spambots. You need JavaScript enabled to view it.
A member of Paediatric Society of Ghana