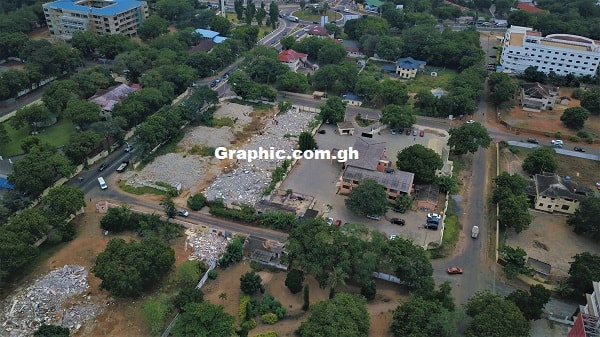 Work on the National Cathedral has practically come to a halt months after the project site was cleared for construction to begin.

The site for the edifice, which is a 14.5-acre land next to the Parliament House of Ghana, was busy with activity in January as buildings on the plot were brought down and some trees cut down to make way for its construction.

As part of initial works, a fence wall bearing a beautiful artist’s impression of the cathedral was erected around the land’s perimeter.

A foundation stone signifying the commencement of construction work was laid on March 5 this year.

In October last year, the Secretary to the Board of Trustees for the National Cathedral, Rev. Victor Kusi Boateng, gave the scheduled date for work to commence on the project as of March 6 this year.

Why we need national cathedral

However, when the Daily Graphic did a follow-up yesterday, very little had taken place since March when activities were halted.

The Daily Graphic observed that except security men deployed to guard the area, there was no other worker on the site.

There was also no equipment on site even as most of the structures on the land had been demolished. The buildings that were still standing had had their roofs stripped off and doors and windows removed.

Taking advantage of the cessation of work on the property, some vagrants had gained access onto the ground through gaps in the fencing and had turned the place into a resting area on the blind side of the security men present.

A security guard who only gave his name as Sammy said work was halted during the partial lockdown and all the workers were sent home. He said he, however, did not know when work would resume.

“Work was stopped due to the movement restrictions and all the workers who were here went back to their respective bases.

“I don’t know when they are resuming work and I can’t tell what is causing the delay. Previously, a few of the workers could be seen on the site but for some time now, they have all moved out completely,” he said.

The National Cathedral of Ghana is an interdenominational Christian church that is being built as part of the legacy to commemorate the country’s 60th anniversary.

It was proposed by the government in March 2017 and is expected to be a physical embodiment of national unity, harmony and spirituality.

The design for the cathedral was unveiled by the President, Nana Addo Dankwa Akufo-Addo, in March 2018. He said at the time that the construction of the cathedral was in fulfilment of a promise he made to God in the run-up to the general election in 2016.

Construction work is expected to be completed within the next five years and is estimated to cost over $100 million.

A board of trustees to supervise its construction was inaugurated in March 2017 and is chaired by a former Presiding Bishop of the Methodist Church of Ghana, Most Rev. Samuel Asante Antwi, with the Metropolitan Archbishop of Accra, the Most Rev. Charles Palmer-Buckle, as Vice-Chairperson, and the Founder and General Overseer of Power Chapel Worldwide, Prophet Kusi Boateng, as Secretary.

It has a heavy representation of the heads of many churches, both orthodox and charismatic.

Preparatory work to get the project began in August last year with the pulling down of bungalows formerly occupied by nine Court of Appeal judges and judicial staff.

The demolition of the bungalows attracted criticism from many quarters and was objected to by a businessman, Mr Jonathan Holm, whose injunction application to the Supreme Court seeking to stop the bungalows from being razed down was dismissed.

Mr Holm had said it was unconstitutional for the government to use the land for the construction of a National Cathedral because the land was compulsorily acquired under Section 3 of the Public Lands Ordinance of 1876 (Cap. 134) from the Osu Stool by virtue of a Certificate of Title dated November 29, 1910, for residential purposes for public officers and had been used for the public purpose for which it was acquired and, therefore, the user could not change it to accommodate the cathedral which was not in the "public interest".