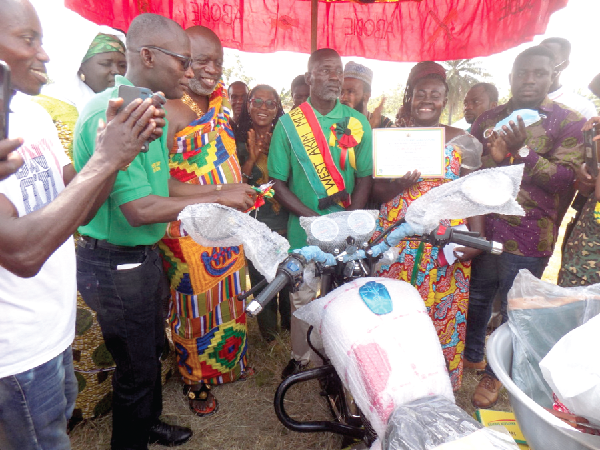 Fifteen outstanding farmers and one agricultural extension officer in the West Akyem Municipality were last Friday honoured at the Farmers Day celebration in the municipality.

He received a certificate, a new motorbike, a spraying machine, a gas cylinder/burner, one aluminium pan, three Wellington boots, seven machetes, insecticides, among other items, as his award.

Ms Abena Nyamekye of Asamankese was adjudged the overall best woman farmer, and received a certificate, a new motorbike and other items for her award.

At the ceremony, the West Akyem Municipal Chief Executive, Mr Seth Oduro-Boadu, commended the farmers for going the extra mile to feed the nation despite the outbreak of COVID-19 and its impact on all spheres and facets of the Ghanaian economy.

He stressed that the government was committed to improving food production, hence the introduction of several interventions in the agricultural sector through the Modernisation of Agriculture in Ghana programme in order to ensure food and nutritional security.

Mr Oduro-Boadu stressed that the christening of this year’s National Farmers’ Day celebration as: “Planting for Food and Jobs – Consolidating Food Systems in Ghana” could not have been more appropriate and timelier, given the global impact of the disease on health and food security.

He entreated the public to strictly observe the COVID-19 safety and preventive protocols to remain safe and sound, saying the country was still battling the pandemic.

He stated that since the outbreak of COVID-19 in the country, as many as 1,209 people had been killed by the disease.

Mr Oduro-Boadu, however, expressed gratitude to the Member of Parliament for the area, Mr Charles Acheampong, for supplying and distributing 89,000 oil palm seedlings free of charge to 775 farmers in the municipality for cultivation on 1,483 acres of land.

The overall municipal best farmer, Mr Amoah, thanked the government and the municipal assembly for the honour.

He appealed to the government to rehabilitate the deplorable roads in the municipality to facilitate the movement of people and the evacuation of agricultural produce to the marketing centres.