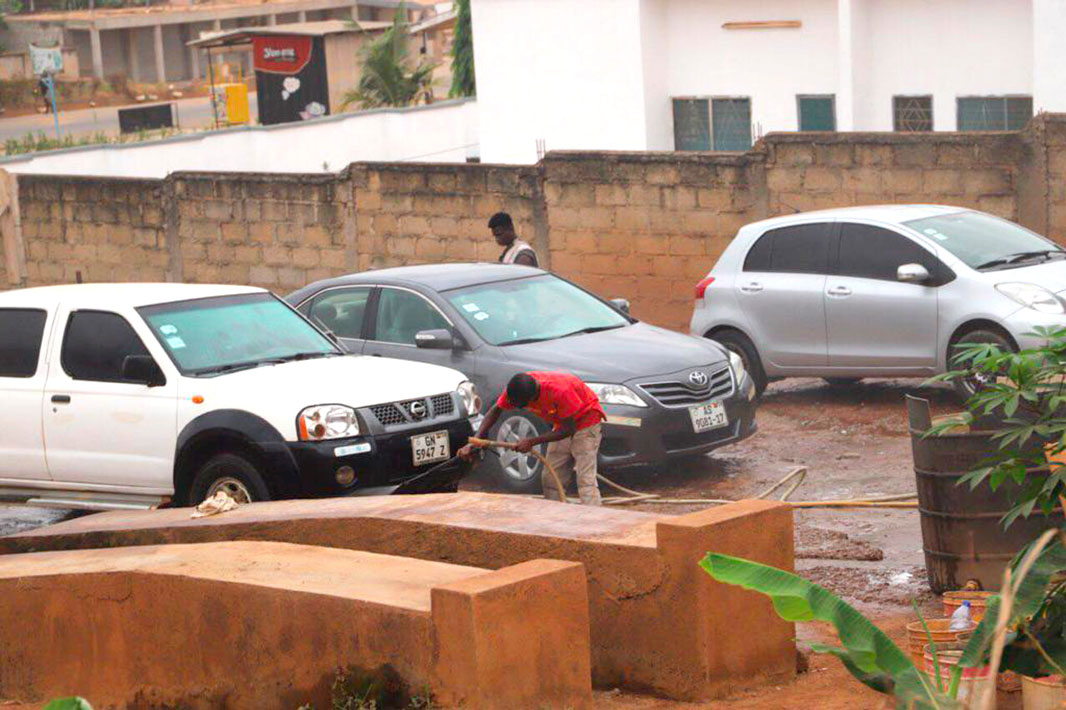 The operators of the washing bay busily working on the site at the Chirapatre Estate in Kumasi
30.5k Shares

Owners of a washing bay and its adjoining welder’s shop have been given a one-week ultimatum to vacate a parcel of land to pave the way for the reconstruction of the Chirapatre Estate roads in the heart of the Asokwa Municipality, near Kumasi in the Ashanti Region.

The new assembly, carved from the Kumasi Metropolitan Assembly (KMA), is leaving no stone unturned in ensuring that the owners, who have subsequently built concrete structures on the site which according to the assembly was given to them on a temporary basis, evacuate the land to allow work to be done on the designated road.

The contractor, Contracta Construction Limited, a Brazilian firm that built the new Kejetia Market, is already on site and is currently working on the drains.

The area, which is not too distant from the Kumasi High School, had its first share of bitumen during the I. K. Acheampong era as part of the construction of the Chirapatre Estate and served as accommodation for public officers and mostly people who worked at the Kumasi Shoe Factory, adjacent to the estate.

“I will personally make sure that the structures are pulled down to pave the way for the much-anticipated project,” the Municipal Chief Executive for Asokwa, Mr Akwanuasa Gyimah, said when this reporter called on him to find out the progress of work at the site.

He said immediately the contract was awarded for the reconstruction of the road barely a year ago, the assembly notified the developers and they willingly agreed to evacuate once work on the road began.

“The President’s year of roads is still on course,” he said, adding that the assembly would continue to work in line with the President’s vision to help develop the area.

Earlier, before the movements restriction last year, residents had protested against what they described as the authorities’ failure to stop the operator of the washing bay from taking over government property, a situation which made some aggrieved residents storm the Methodist Church in the estate where the Assemblyman, Mr Kofi Adu, was worshipping and confront him on the issue.

Mr Adu urged the residents to exercise restraint and ignore rumours surrounding the evacuation of the operators, adding that “authorities will work in the interest of residents”.

All attempts to hear the side of the operators proved futile.