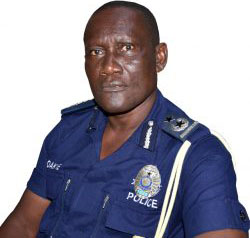 The Accra Regional Police Command has advised operators of filling stations to tighten security around their stations following a rise in robbery attacks on such operations.

The recommendation of the police include the installation of undercover close circuit television (CCTV) cameras on their premises, well-lit environments, installation of quality security doors, burglar proofs and alarms and undertaking security and background checks of the people they employ.

Some of the measures could be executed with the assistance of the Criminal Investigation Department (CID) of the Ghana Police Service.

There has been a number of robbery attacks on filling stations in some parts of the Greater Accra Region in recent times.

The latest attack was on the Ashongman GOIL Filling Station, which led to the killing of a security man while two attendants were locked up. The robbers made away with GH¢2,006.

Before then, there was another attack on a filling station at Dodowa in the Greater Accra Region in which the robbers made away with some cash.

To curb the development, the Accra Regional Police Commander, Deputy Commissioner of Police (DCOP) Mr Afful Boakye Yiadom, instructed all divisional police commanders to meet filling station operators in their jurisdictions to discuss the trend and the way forward.

Speaking to the Daily Graphic after the two meetings, the Public Relations Officer (PRO) of the Accra Regional Police Command, Deputy Superintendent of Police (DSP) Mrs Effia Tenge, said the objective was to sensitise them to the current security developments and ensure the safety of their workers, proceeds and other assets.

She said about 20 managers and supervisors of various filling stations, including GOIL, Shell, Allied Oil, and TOTAL attended the two meetings held separately.

During the meetings, DSP Mrs Tenge said the police urged the filling station operators to ensure that their daily sales were deposited at the bank and different routes should be used to avoid being monitored by criminals.

They were also encouraged to install CCTV cameras at vantage points on their premises which should not be visible to the public, while their environments should be well lighted.

Additionally, they were asked to fix quality security doors and burglar proof doors to prevent easy access to their offices and shops by criminals.

The police commanders also urged the operators to install alarms and conduct security and background checks of the people they employed.

For such background checks, the CID Headquarters must be contacted to take employees through employment documentation.

The management of filling stations, Mrs Tenge said, were also asked to make efforts to know the residence of their employees and also demand guarantors of them.

They should also introduce occurrence books for their private security personnel which would be used to record events while they were on duty.

They were also advised to report suspicious characters to the police, but must establish good relationships with members of communities in which they operated.

Furthermore, the downstream petroleum station operators were advised to close their business activities on time and consider not operating at odd hours so that they do not give criminals the opportunity to target them, DSP Mrs Tenge said.

While the police assured them of patrols, the station operators were also encouraged to have the contact numbers of the patrol teams for prompt and effective communication.

The managers and supervisors in turn commended the police for the interaction and suggested that they organise similar meetings for attendants and other employees of the filling stations.

They expressed appreciation to the police and promised to abide by the security tips they had provided.