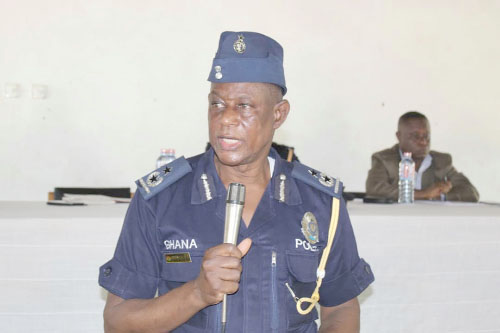 The Upper East Regional Police Command says it has extended an invitation to tomato traders and commercial drivers plying the Bolgatanga-Paga highway to help find ways of dealing with the spate of armed robbery attacks on that stretch of the road.

However, before that meeting is held, the police command says it has put in place some measures to curb robberies on the road.

One of the measures is the positioning of personnel at Karemenga, which is between the North East and the Upper East Regions, so that anytime tomato traders and drivers approach the area they are able to draw the attention of police for security to be provided.

Briefing the Daily Graphic on the measures being put in place by the police to curb the armed attacks on traders, the Public Affairs Officer of the Regional Police Command, Assistant Superintendent of Police (ASP) Mr David Fianko-Okyere, indicated that although as of 11a.m last Wednesday, the traders and drivers were yet to honour the command's invitation, some steps had been initiated to nip the robberies in the bud.

These include the provision of an additional 24-hour vehicular patrol team under the leadership of the Talensi Police Commander around the Winkogo junction.

A snap checkpoint has also been put in place around the speed ramps at the Winkogo junction area, while “plain cloth personnel have also been positioned at vantage points in the communities around the Winkogo area to gather intelligence on the movement and activities of miscreants".

“We realised that in the latest incident that took place in the Winkogo junction area, the robbers neither used motorbikes nor vehicles for the operation and so police believe they were hiding in the communities and then eventually launched the attacks," the Public Affairs Officer stated.

Within one month there have been two robberies on the Pusu-Namongo and Winkogo Junction area which have claimed two lives.

He explained that the meeting was to among other things ensure that the traders and commercial drivers shared their “movement itinerary” with the police to enable them to be provided with police escort.

“We have sent a message to them to ensure that they give us an idea of their movement plan to discuss how we the police can help them; they could for instance move in groups or in batches and as soon as they are approaching the region they could give us a call for us to escort them to Paga," he pointed out.

Meanwhile, some traders and drivers say they believe their leaders contacted the police in the region for action to be taken to curb the robberies.

A tomato trader, who gave her name as Ms Mary Serwaa, who has been in the business for the past 20 years, appealed to the Inspector General of Police, the government and security agencies in the region to help provide the necessary police escort to ensure safety on the road.

Narrating one of her experiences on the road, she said she was fortunate not to have been killed although all her money was taken away by the robbers.

Ms Serwaa, who transacts her business between the Eastern Region and Burkina Faso, stated that anytime she was travelling on the road she prayed all the time for God to grant her “travelling mercies” to reach her destination safely.

“We are your mothers, wives, sisters and aunties; please help us because in some cases an entire family and community depend on our earnings in the trade to survive,” she lamented.

A truck driver, Mr Kwaku Boateng, who plies the Kumasi-Bolgatanga-Paga route, for his part, said there was an urgent need for the police to do something about the spate of robberies, and that he was a victim of the recent attacks that claimed the lives of two drivers in the region.

“I think between Kumasi and Paga we have about 35 police checkpoints and I am wondering why the police are not able to curb these armed attacks,” he said.

Mr Boateng, therefore, appealed to the IGP to withdraw all police personnel including senior officers that were not discharging their respective duties well and replace them with competent personnel along that stretch of the road.

He also stressed the need for the country to look into the proliferation of weapons, particularly AK 47 rifles, to prevent criminals using those weapons to terrorise commuters on the road.

On February 5, 2021, some angry drivers blocked portions of the Bolgatanga – Navrongo highway in protest over the increasing robbery attacks on them.

The drivers who were visibly frustrated parked their trucks on the road causing a traffic jam on the highway with the aim of gaining the attention of security agencies to address the worrying situation.

“We are tired and scared for our lives on this road. The robbers are killing us without any action from the police. It is sad,” some of them said.

The victims of these robbery incidents are mostly truck drivers transporting ‘Market Queens’ to Burkina Faso for business.