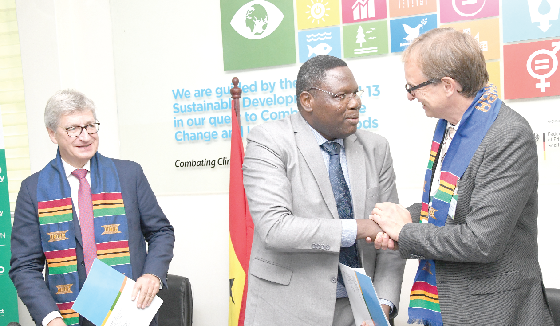 The Executive Director of the West African Science Centre on Climate Change and Adopted Land Use (WASCAL), Dr Moumini Savadogo, has said that the huge potential in green hydrogen technology cannot be overlooked if West Africa wants to deal with issues of climate change.

Green hydrogen, he said, had been lined up to be one of the key components of the unavoidable energy transitions that the main economies in the world had to lead to achieve carbon neutrality and stop climate change.

“The only waste it emits is water, and it is 100 per cent renewable. It’s generated using natural resources that don’t run out, such as wind power and solar energy,” Dr Savadogo said.

Green hydrogen is clean fuel that permits the storage and use of energy from renewable sources and an appropriate substitute for fossil fuels in industries that are difficult to decarbonise.

The green hydrogen technology is considered one of the smart solutions that can help West Africa deal with issues of climate change.

At a media engagement, Dr Savadogo said West Africa had become a “hot spot in climate change” and, therefore, needed a paradigm shift to think thoroughly about actions that would offer sustainable solutions.


The technology, he said, offered hope to rescue the sub-region from greenhouse emissions, the impacts of which included havocs such as floods, drought and temperature rise.

To push the technology far in West Africa, he said, WASCAL — with its German partners, Forschungszentrum Julich (FZJ) GmbH and RWTH Aachen University — was leading in the exploration of the potential of generating, utilising and exporting green hydrogen as an economic driver in the sub-region.

At the ongoing United Nations Conference on Climate Change (COP27) in Egypt, WASCAL is expected to showcase its contributions towards the mitigation and adaptation of climate change in Africa through its green hydrogen programme, with a focus on capacity-building and research to serve as a building block to find the right solutions to combat climate change and improve livelihoods.

Dr Savadogo disclosed that an atlas had been generated to provide guidance to decision-makers from politics and industries on where the enormous potential of green hydrogen was in West Africa.

As part of efforts to make the green hydrogen technology a success, WASCAL has signed a memorandum of understanding (MoU) with FZJ GmbH and RWTH Aachen University to formalise their commitments.

Dr Savadogo noted that “with this agreement, we are going to make something big in terms of green hydrogen”, adding that the already existing collaboration had only been broadened with the MoU, and that it was going to strengthen their research, information and knowledge sharing activities.

“We have already started something big with capacity-building,” he said, stressing that WASCAL — in partnership with the German Federal Ministry of Education and Research — had launched the graduate school programme for Green Hydrogen.

Through this programme, which started last year, 60 students from ECOWAS have been granted scholarships to pursue international master’s degree in Energy and Green Hydrogen Technology.

The students were to receive training on state-of-the-art tools used in renewable energy, green technology and policy to prepare a new generation of interdisciplinary professionals capable of proposing adapted solutions to the ongoing energy crisis in West Africa.

The Chairman of FZJ Board of Directors, Prof. Wolfgang Marquardt, said the three institutions had made a good start with the green hydrogen technology in terms of capacity building to lay a solid foundation for a major solution to climate change.

Prof. Wolfgang said the industrialised nations had made a lot of mistakes in the past by relying on fossil energy, and that their joint knowledge and experience would help to cure the problem created in the climate.

Prof. Peter Letmathe of the Aachen University said the institution was happy to be part of the partnership for the project.