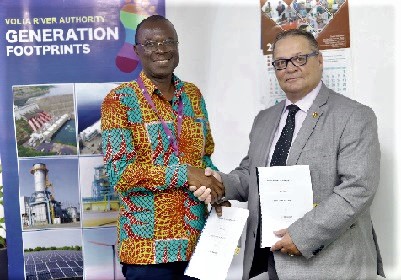 The Volta River Authority (VRA) has signed a memorandum of understanding (MoU) with CPI Training, a Canadian project management firm that provides talent management solutions across the world, to offer customised training for selected staff of the authority.

The collaboration will enable CPI to procure for the benefit of the VRA staff practical training and industrial attachments, among others, in the area of technical expertise, leadership and other capacity-building programmes with identified Canadian institutions with expertise operating in the energy sector.

The MoU, therefore, establishes the framework that will guide the collaboration of both parties towards capacity-building programmes through structured and targeted industrial attachment in quasi-classroom and practical training sessions with identified Canadian institutions with expertise in the energy sector such as SaskPower, the power provider and Saskatchewan Polytechnic, both in the Saskatchewan province of Canada.

The Chief Executive of the VRA, Emmanuel Antwi-Darkwa, signed the MoU last Tuesday (September 6) on behalf of the largest power generator at its head office in Accra, while Founder and President of CPI Training, Terry Drabiuk, signed on behalf of his organisation.

Mr Antwi-Darkwa described the signing as timely and very important as the authority was poised to continue to build the capabilities of its employees and also expose them to best practices across the globe.

The Chief Executive noted that in the past, VRA had a similar arrangement with Ontario Hydro of Canada and, therefore, expressed the hope that the implementation of the three-year MoU would enable staff of VRA to benefit from recommended training programmes and also have the opportunity for hands-on practical lessons in some reputable institutions in Canada.

For his part, Mr Drabiuk expressed delight and appreciation for the collaboration with the VRA and gave an assurance that CPI would deliver a broad array of world-class training and exposure to the staff of VRA.

The training programmes, as spelt out in the MoU, shall comprise industrial attachments, quasi-classroom training in agreed subject areas and practical field programmes.

CPI performs all kinds of training for organisations around the globe using their open source network of post-secondary institutions and individual freelance contractors.