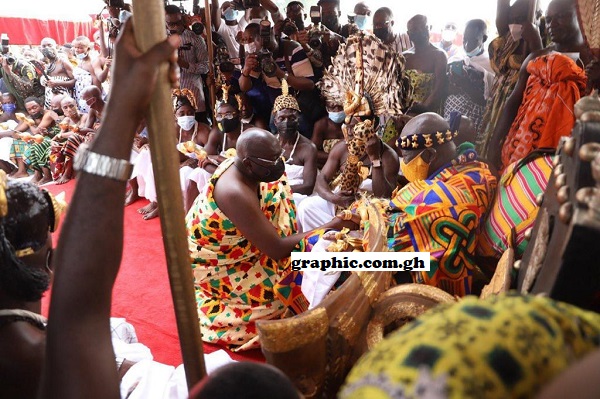 The Asantehene, Otumfuo Osei Tutu II was joined by the Vice President, Alhaji Dr Mahamudu Bawumia, and his wife, Samira, as well as hundreds of people to mark the final Akwasidae festival on Sunday amidst the firing of intermittent musketry.

It was a display of Asante's rich culture of drumming and dancing and the showcasing of different versions of the kente cloth.

Drums of different sizes were on hand to herald chiefs to the grounds as well as the display of Asante's Kete and Fontomfrom drums.

Otumfuo, in whose honour the durbar was held, arrived in a palanquin, accompanied by a heavy entourage and security.

The durbar grounds witnessed a mixture of everything including politics as supporters of the Vice president were seen openly rooting for him to win the next New Patriotic Party presidential primaries.

Not only that, but high-profile members of the ruling government were also present, from the Chief of Staff, Akosua Frema Osei-Opare, to the Information Minister, Kojo Oppong Nkrumah.

Traders also cashed in on the political activity to make money from supporters of the hopefuls.

The Akwasidae Festival (alternate, Akwasiadae) is celebrated by the chiefs and people of Ashanti, as well as the Ashanti diaspora.

The festival is celebrated on a Sunday, once every six weeks.