VIDEO: See the design of the 101 Agenda 111 district hospitals 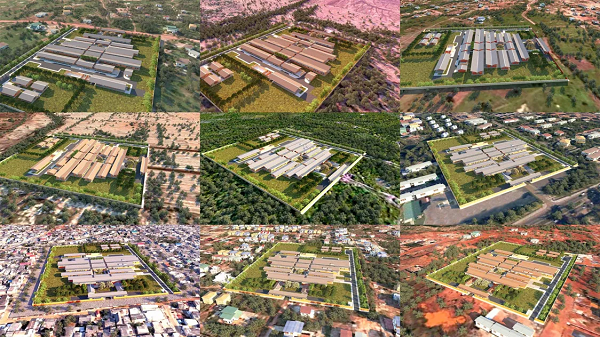 Multiple aerial views of the hospitals

Award-winning architectural and design firm, Adjaye Associates have unveiled the design of the 101 district hospitals to be constructed as part of the governments' Agenda 111.

In a statement, the firm owned by celebrated Ghanaian-British architect Sir David Adjaye said the district hospitals presents an opportunity to transform Ghana’s medical system by establishing unparalleled access to healthcare facilities throughout the country.

"Guided by the ambition to define a next-generation hospital experience, the design concept merges 21st-century technology with a contextual and holistic approach crucial to the delivery of state-of-the-art healthcare," the statement said.

Dusk view of the hospital

"Unlocking the centuries-old wisdom of the Adinkra symbols, our design sought inspiration from the Denkyem, which symbolizes a crocodile—a creature able to thrive with both air and water that is celebrated for its adaptability and intelligence," the statement said.

Acknowledging that the building design will need to adapt to over 101 locations in different urban and rural settings across the country, the design scheme embraces smart strategies and ecologically responsive systems able to conform to each unique geographic condition. The use of prefabricated systems work conductively with materials to maintain the lowest possible carbon footprint whilst also maximizing the ability to reproduce efficiently and rapidly.

Central courtyard of the hospital

Departing from the assumed poor industry standards of hospitals where visitors often feel lost on arrival, the form of the building becomes a tool for wayfinding with a defined canopied entrance that guides you into the heart of the building. Through a language of clustered horizontal and vertical bars, the building branches out from a central spine that is activated by a central garden and a series of nature-filled public spaces. Easily identified by the lush landscaping situated within the centre of the single-story campus’, the introduction of public gardens departs from the status quo of hospital design where all spaces are entirely enclosed and sterile. Instead, the central garden and the ancillary green spaces punctuate the plan and provide an overall atmosphere of healing crucial for patients.

The patient ward is situated at the outermost perimeter along the rear of the building to ensure natural light and open-air flow, crucial for health and healing. Designed for their specific functionality, the building’s are differentiated through their roof structures: gable or Butterfly. For programmes such as the patient wards, the Butterfly Roof is used to maximize the amount of natural light and cross ventilation resulting in less energy consumption for artificial lighting and excessive mechanical cooling.

In contrast to the patient wards where maximized light and airflow are welcomed, other spaces such as surgery require a more controlled environment. In these instances, the Gable Roof typology is deployed. This ensures minimum exposure to the natural elements using the roof’s long overhangs to protect against the sun’s rays and provide shade on the building envelope. Despite the differences in the roof structures, both types effectively harvest rain water and provide an insulated shell to minimize heat gain on the building interiors.