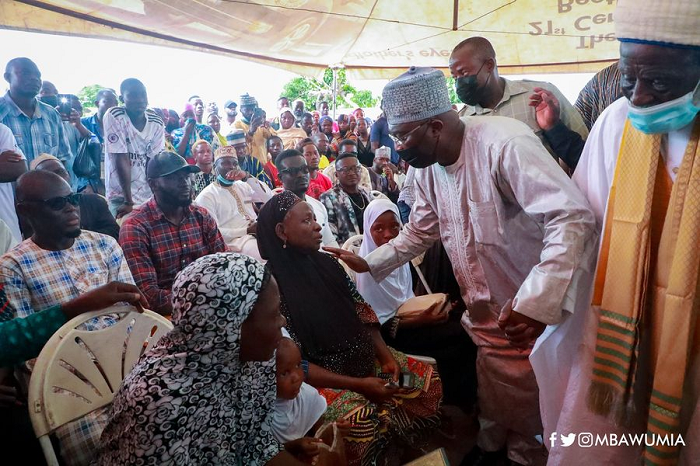 A high-powered delegation, led by the Vice-President, Dr Mahamudu Bawumia, yesterday visited Ejura in the Ashanti Region to commiserate with the people and families of those who lost their lives in the recent disturbances in the area.

The National Chief Imam, Sheikh Osman Nuhu Sharubutu and his elders were among the delegation.

The delegation visited the chief’s palace and the bereaved families after which they held meetings with the Zongo chiefs in the town.

On behalf of the government, the Vice-President presented a cash amount of GH¢20,000 to each of the three bereaved families to help them in the performance of funerals of the deceased.

He also donated 1,000 bags of cement and GH¢50,000 towards the construction of a Divisional Police Station for the area.

Mr Kan-Dapaah also donated 500 bags of cement, while the Chief Imam presented 100 bags and a cash donation of GH¢2,000 towards the police project.

At the Ejuramanhene’s palace, the Chief Imam appealed to the youth of Ejura to remain calm and allow the ministerial committee of enquiry, set up by the Minister for the Interior, to complete its works.

He described the incident that led to the death of Ibrahim Mohammed, alias Macho Kaaka, and the shooting of Abdul Nasir Yussif and Muntala Mohammed as unfortunate.

The Chief Imam assured the people that the truth surrounding the incidents of June 27 and 29, this year, would be unravelled.

Speaking through his spokesman, Sheikh Aremeyaw Shaibu, the Chief Imam expressed his condolences to the Ejuramanhene, Barima Osei Hwedie II, and the bereaved family for their loss.

Sheikh Sharubutu expressed the hope that the three-member committee of enquiry, chaired by Justice George Kingsley Koomson, a Justice of the Court of Appeal, would do a diligent work to bring justice to the affected family.

He said justice would be the only thing that would “remedy and assuage the feeling of pain, fear, anxiety and bitterness in the hearts of those who have been affected.

“More importantly, it will help prevent such unnecessary and unfortunate occurrences from happening,” the Chief Imam added.

He, therefore, urged the committee to be “guided by the principle of honesty and truth, the principle of justice in which our rights and protection can be guaranteed and to unravel the truth about the whole incident and to ensure that justice is done”.

The Ashanti Regional Minister, Mr Osei-Mensah, assured the people of the government’s commitment to unravel the circumstances that led to the unfortunate incident.

He said the incident that led to the death of Macho Kaaka was purely criminal and, therefore, must not be politicised.

According to him, it was to avoid the politicisation of the issue that the Vice-President elected not to speak, but rather delegated him to do so.

Mr Osei-Mensah said the issue of compensation would be addressed by the committee of enquiry tasked to investigate the happenings that led to the death of the three.

The Ejuramanhene, Barima Hwedie, reiterated the call for the establishment of a military base at Ejura to help improve on the security situation in the town.

He said Ejura was gradually losing its status as a peaceful town as it was now being associated with violence.

Barima Hwedie said the town’s population was growing for which reason there was the need to increase the presence of security personnel in the area.

The chief offered the piece of land for the construction of the divisional police station.

On Saturday, June 26, 2021, a social media activist, Macho Kaaka, was attacked by some unknown assailants in front of his house at around 1:30 am and left him in a critical condition.

He was later rushed to the Ejura Government Hospital where he was referred to the Komfo Anokye Teaching Hospital in Kumasi on Monday, June 28, 2021 at around midday.

Following the news about his death, the youth of Ejura went on a demonstration on that same day but was quelled by the police with the assistance of the military.

However, on Tuesday June 29, on their return from the cemetery where they went to bury their compatriot, the youth embarked on another protest, calling for justice for Macho Kaaka.

In the process, they clashed with the security personnel leading to the death of Abdul Nasir Yussif and Muntala Mohammed.