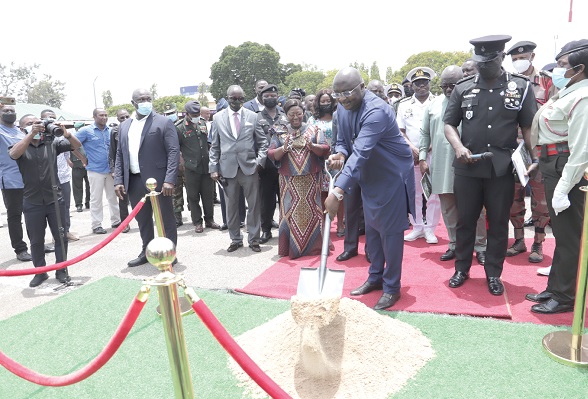 Vice-President Dr Bawumia (with shovel) cutting the sod for the construction of offices for the military. With him is Akosua Frema Osei-Opare, Chief of Staff. Picture: SAMUEL TEI ADANO Follow @Graphicgh

The Vice-President, Dr Mahamudu Bawumia, on Monday, March 4, 2022, cut the sod for the construction of a Defence Industries Department (DID) Office, an indoor firing range and a legal office complex, all at an estimated cost of over $20 million, for the Ghana Armed Forces (GAF).

The project, which is part of an approved infrastructure support by the government for the GAF since 2017, will be sited at the precincts of the Burma Camp and the Military Academy and Training School (MATS) in Accra.

Established as a limited liability company in 2010, the DIHOC, which had been formed to undertake industrial development, was born out of consultation between the Ministry of Defence and the Military High Command when they launched a programme dubbed: “Civil-military collaboration for socio-economic development”.

The company is mandated to attract investors for fruitful partnerships for the establishment of factories, garment and footwear, printing and publishing, vehicle assembling plant, explosive ordinance devices, housing, among others.

Although established as a holding company with 10 thematic divisions, DIHOC has, over the seven years of incorporation, managed to operationalise only the footwear division.

The venture companies on board now include DIHOC-Denzel Ghana, which is into the dredging of river bodies; DIHOC-McDan Logistics Solutions, which is into the development of an ultramodern onshore logistics hub and an amusement park, and DIHOC-Black Swan International, which is for the manufacture of small calibre ammunition.

Dr Bawumia said the GAF and other security services in the country were repositories of resourceful human capital in engineering, architecture, business administration, logistics management, nursing, medicine, among other professions.

He said the GAF were not only imbued with productive skills but also trained in ethics of discipline and precision, as well as the virtue of honesty and dedication, which reflected in whatever duty or task they were assigned.

The Vice-President also said the structure in armaments acquisition through sales and purchase agreements for the GAF was associated with challenges, thereby undermining the efficiency of security establishments which depend mainly on imported hardware and equipment for their operations.

He also said there was little skill or knowledge transfer in such sales and purchase arrangements with foreign suppliers, adding that maintenance and logistical support for such equipment and ammunition came at a huge cost to the government, even when some of them were supposed to be donations.

“This undesirable state of affairs in the GAF was among the reasons President Nana Addo Dankwa Akufo-Addo made it a matter of unavoidable necessity to institute the government's flagship programmes such as One-District, One Factory (1D1F) and Ghana Beyond Aid,” Dr Bawumia said.

He said although the GAF had had DIHOC for some years now, the entity had not been leveraged significantly to catalyse the industrialisation agenda of the country until now, adding that the status quo could not continue to persist in the era of industrialisation by the government.

He further described the GAF as an indispensable pillar in the industrialisation drive of the country and said creating an industrial complex that had the potential of creating over 15,000 direct jobs, with an investment portfolio of over $1 billion, was amazing.

He urged the business community to go into more of such collaborations with the GAF to develop a diversity of production value chains that would benefit all.

The Chief of the Defence Staff, Vice-Admiral Seth Amoama, said for the effective management of human security challenges, it was important that the GAF became more proactive in their desire to contribute towards national development.

On DIHOC, he said all legal issues relating to the formation of the company and its operation had been addressed.

“Additionally, this endeavour conforms to provisions of the 1992 Constitution, particularly Article 210(3), which lends credence to the proposition for the GAF to engage in developmental projects in the country,” he added.

Vice-Admiral Amoama also said the GAF aimed to provide most of its logistical needs and those of the other security services in a cost–effective manner.

He added that his outfit would create an avenue for the engagement of retired military personnel and the public by undertaking poverty alleviation programmes.