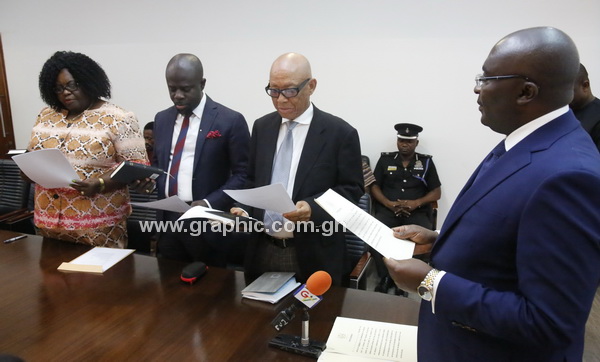 Vice-President Dr Mahamudu Bawumia Friday, February 8, swore in two members and the secretary to the Commission of Inquiry into the violence which occurred during the by-election in the Ayawaso West Wuogon Constituency of the Greater Accra region and reminded them to endeavour to complete the work within a month.

They are Mr Justice Emile Short who is the chairman, Professor Mrs Henrietta Mensah-Bonsu, a member and Mr Ernest Kofi Abotsi, secretary to the commission. A former Inspector General of Police (IGP) Mr Patrick Kwarteng Acheampong who was said to be out of the jurisdiction will be sworn in on his return to the country.

Swearing of oath
Dr Bawumia who led members of the commission to administer the official oath and the oath of secrecy respectively, assured the commission that all the necessary arrangements and logistics would be provided them to ensure their work proceeds impartially.

He added that their role as members of the commission was a national service for which the nation was grateful.

Describing the work of the commission as historic, the Vice-President who recalled similar violent incidents which characterized by-elections in Talensi, Chereponi and Atiwa constituencies said it was the first time such violence during elections was being investigated and that he indicated, “showed the difference to deal with the issue of electoral violence fundamentally.”

He expressed appreciation to President Nana Addo Dankwa Akufo-Addo and the Vice-President Dr Mahamudu Bawumia for the confidence they had in them and gave the assurance that “we will carry out our work in transparency, objectively and in a fair manner.”

He also called for total support from all stakeholders particularly political parties, civil society and all well-meaning Ghanaians for the commission.

“Give us all the support so we can find credible and lasting solution to the phenomenon of electoral violence and vigilante groups. We think that it is important not just to look at the symptoms but to identify the underlying causes of these two problems”, Mr Short stressed

Background
The Vice-President, Dr Mahamudu Bawumia, with the consent of President Nana Addo Dankwa Akufo-Addo, last Wednesday set up a Commission of Inquiry to investigate the violence which occurred during the by-election in the Ayawaso West Wuogon Constituency on January 31, 2019.

A former Dean of the Faculty of Law of the Ghana Institute of Management and Public Administration (GIMPA) and a private legal practitioner, Mr Ernest Kofi Abotsi, is the Secretary to the commission.

They are to make a full, faithful and impartial enquiry into the circumstances of, and establish the facts leading to, the events and associated violence during the Ayawaso West Wuogon by-election; to identify any person responsible for or who has been involved in the events, the associated violence and injuries; to enquire into any matter which it considers incidental or reasonably related to the causes of the events and the associated violence and injuries; to submit within one month its report to the President, giving reasons for its findings and recommendations, including appropriate sanctions, if any.