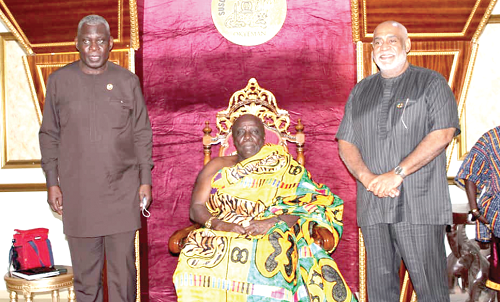 The United Nations (UN), in partnership with the Okyeman Environment Foundation (OEF), has started an initiative to restore vegetation at degraded mining sites in the Eastern Region.

The UN system in Ghana secured a $1 million grant from the UN Human Security Trust Fund and a $1.3 million co-funding from five other UN Agencies to undertake the three-year project that will help to address multiple development issues facing Okyeman.

The UN Resident Coordinator, Mr Charles Abani, who said this during a courtesy call on the Okyenhene, Osagyefo Amoatia Ofori Panin at Ofori Panin Fie, Kyebi in the Akyem Abuakwa South Municipality last Thursday, added that there would be a renaissance of the development of various communities in the area.

"UN Agencies (UNDP, UNICEF, WHO, UNEP and UNV), together with the OEF, have been working together to develop a multi-sectoral programme to address multiple interconnected challenges facing the people. Core areas of focus are environment, health, education and other livelihood empowerment components," he said.

According to Mr Abani, three million trees would be planted over the next three years under the environment component to restore degraded lands and also create awareness of the best agroforestry practices as well as complement Okyenhene's vision to plant 25 million trees by 2024 in Akyem Abuakwa.

The project, he added, would also provide alternative livelihoods and jobs, strengthen local institutions to protect the environment against illegal mining, strengthen the educational system and clean contaminated water bodies.

The coordinator also said within the three-year span of the project, over 1.3 million people across five districts in the region would benefit from the intervention.

The Okyenhene expressed worry about the excessive centralisation of development policies, saying local participation in policy formulation processes and implementation could facilitate the rapid development of communities.

He lamented the impact of environmental degradation across the country due to mining which had been going on in the country for over 100 years now.

The Okyenhene also attributed the massive insurgence of microbial diseases across the world to the destruction of vital vegetation and water resources.

He, therefore, appealed to the people to respect nature by preserving the environment for sustainability of future generations.

The chief further expressed gratitude for the project and urged the leadership of OEF to support the project to yield the desired impact.

For his part, the Head of SDGs Advisory Unit at the Office of the President, Dr Eugene Owusu, said the destruction of water bodies and vegetation posed a threat to the climate, hence the need for the implementation of such a project to help combat the insurgence of climate change.

He also said the involvement of traditional authorities and the grass roots in the project was part of the core agenda in the national transformation policy the government had begun as part of the Green Ghana campaign to help preserve vegetation and water bodies.