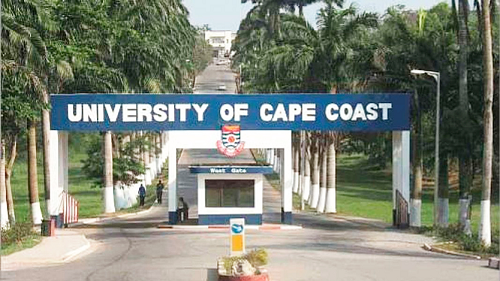 The Director of the Directorate of Research Innovation and Consultancy (DRIC) at the University of Cape Coast (UCC), Professor Frederick Ato Armah, says the university would strive to consolidate gains in educational and research excellence.

With the university ranked as the fourth best in Africa, Prof. Armah said what was now important was for it to maintain its status on the international front as an institution excellent in higher education.

UCC was ranked number one out of the 138 new entrant universities and among the top 350 universities globally, making it the only university in the country to achieve this feat.

The ranking body, Times Higher Education, noted that it had carefully calibrated performance indicators to provide the most comprehensive and balanced comparisons and data, which were independently audited by professionals to arrive at its decision.

Prof. Armah said the recent global feat attained by the university as one of the topmost universities globally in the area of research excellence was a wake up call on authorities, including management of the university, to put in all necessary measures and commitments to cement the gains.

In an interview, Prof. Armah said the DRIC had worked to ensure that research and publications by the university's research directorate were relevant to solving societal needs.

Prof. Armah explained that as much as the feat was prestigious, it had thrown challenges at them to maintain the standard and even achieve greater heights.

“What we are doing now is to consolidate the gains we have made and as a university, we are taking all steps to ensure that areas that we didn’t strive well are areas that we are going to address to make sure that we go higher in the ranking, and I believe that the issue of sustainability will be guaranteed,” he added.

“We need high-level institutional management, we need commitment from the top university management, the Vice-Chancellor and the Pro Vice-Chancellor to be able to prosecute this agenda of situating us in this particular rank and sustaining the momentum,” he stated.

He stressed that the university, through its research, had made a lot of impacts locally and globally hence the recognition, and said it would continue to impact society.

He said the university was ready to move beyond just addressing challenges within their immediate environment and focus on seeking global partnerships to address global challenges.

“Universities have a mandate, and their mandate is to teach, research, innovate and to impact society positively, and everything we are doing when it comes to our research, teaching, partnership and innovation we are looking at societal impact as the big picture perspective.”

Part of the citation read: “The formidable reputation of our scholarly research outputs each year is indicative of the solid track record of UCC during the past six decades, and definitely contributed to this achievement. By this feat, UCC has demonstrated that its pedigree in higher education and the impact of its scholarly research are unparalleled in Ghana and Africa”.

The Director of Public Affairs, Major Kofi Baah-Bentum (retd), in a statement, indicated that the school’s recognition on the international front would give it the urge to effectively position itself for professional development.

“This achievement gives expression to the vision of UCC — to be a university with a worldwide acclaim that is strongly positioned for innovative teaching, research, outreach and professional development,” the statement said.

Some students of the university, who spoke in an interview, expressed excitement about the development, saying the university had driven hard enough to attain the feat.

A first-year student, Tony Yeboah, said “before I gained admission, I was told passing exams was very difficult because of their high standards and I have come to experience that”.

“Even outsiders have come to accept that UCC sets the highest standards for higher education in the country, and we hope we keep up with this.

“UCC has always been a university of competitive choice and this achievement comes in to solidify that,” he added.