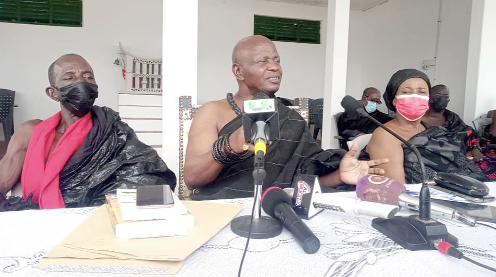 The Omanhene of the Ekumfi Traditional Area, Odeefuo Akyin VIII, says chieftaincy disputes and "contractors” will not be allowed to disrupt the peace and development of Ekumfi Eyisam and its adjoining communities.

In a stern warning, Odeefuo Akyin said some persons at Eyisam who had taken on the role of "chieftaincy contractors" would not be allowed to manipulate the youth in a bid to disrupt efforts at maintaining peace in the area.

He said while he and his council were committed to ensuring peace, the traditional council would work with security agencies to ensure that people did not hide behind chieftaincy issues to disrupt the peace of the area.

Odeefuo Akyin was speaking at a press conference to dispel rumours that he was imposing a chief on the Eyisam community.

He indicated that the chieftaincy dispute in Ekumfi Eyisam was a security concern and stated that the traditional council would not allow it to degenerate.

Giving some background to the case, Odeefuo Akyin said he received a letter in August 2018 indicating the consent of parties which was signed by Nana Kojo Gyamera, Head of the Twidan Number One Family of Ekumfi Eyisam and Nana Afua Homaba, the queenmother of Eyisam, asking the traditional council to arbitrate the case.

He explained that based on the Chieftaincy Act that gave them the power to arbitrate the Eyisam case, he set up a committee agreed upon by both the plaintiffs and defendants who pledged to be bound by its decision.

Odeefuo Akyin said after its work, the arbitration committee found on September 12, 2018 that Nana Homaba, the queenmother, erred in nominating one Daniel Osae Esihene of Yedu House as chief.

He said the committee found that the chief elect was not from the Impraim house, which was the house that had the sole responsibility of nominating a chief.

"After going through their family history given orally by both parties and with family documents provided to the arbitration committee, it was again proven that Ekua Apaawa, the mother of Nana Impraim VII, was not a direct descendant of Nana Kwame Akumenyi for him to have been installed as Nana Impraim VII.

Odeefuo Akyin stated that the arbitration committee, therefore, concluded that the nomination of Daniel Osae Esihene, another person outside the Impraim House to be Nana Impraim VIII was historically wrong and not supported by facts as given during the hearing and should be set aside. He, therefore, asked the Twidan No 1 family to meet and do a proper nomination from the Impriam House.

He said his office was ready to meet the youth leaders of the town to explain the issues for peace to prevail in the communities.

Some chiefs and residents of Ekumfi Eyisam in the Ekumfi District in the Central Region last week held a demonstration, calling on the Central Regional House of Chiefs to resolve the chieftaincy disputes and the consequent tension they had brought to the area.