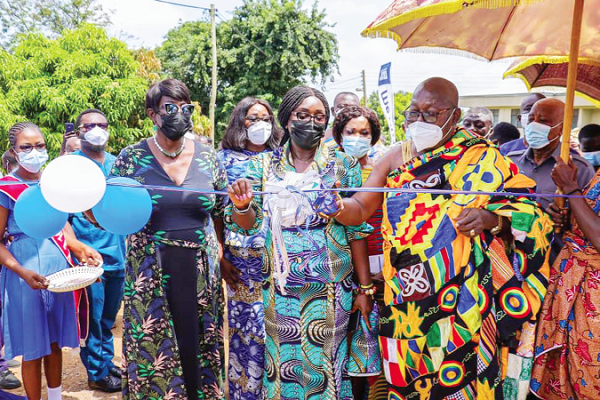 Nana Osei Bosompem III (in Kente), Chief of Jachie and acting President of the Nsuta Traditional Council, cutting the tape to inaugurate the new boys dormitory for the Nsutaman Catholic SHS at Nsuta in the Ashanti Region (above). Pictures: EMMANUEL BAAH Follow @Graphicgh

Tullow Ghana Limited has built and handed over a 16-unit boys dormitory block for students of Nsutaman Catholic Senior High School (SHS) at Nsuta in the Sekyere Central District in the Ashanti Region.

The facility will directly accommodate 416 boys every year and is expected to increase enrolment.

It is furnished with beds and mattresses, has a 40-seater water-closet toilet facility, connected to four 1,000-litre tanks for water supply and fenced.

The project is in line with “Tullow’s Free SHS Project”, a commitment the company made two years ago to invest $10 million in the construction of infrastructure for 15 senior high schools in five years to support access to quality secondary education.

The inauguration of the dormitory block attracted a number of dignitaries, including the acting President of the Nsuta Traditional Council, Nana Osei Bosompem III; the Bishop of the Catholic Diocese of Konongo-Mampong, Most Rev. Joseph Osei Bonsu, and the Vicar General of the Catholic Diocese, Rev. Fr Augustine Owusu Sekyere, 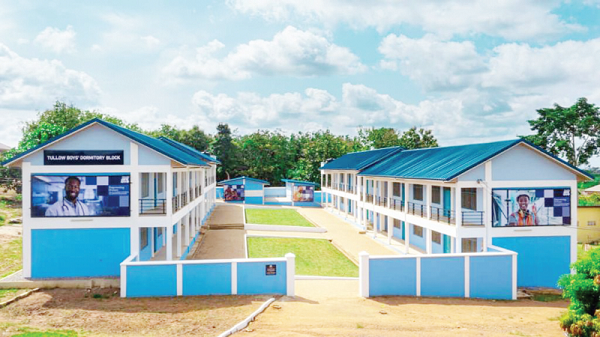 She said globally, the pursuit, development and application of education remained a bedrock for growth, development and progress, and that Tullow Ghana was committed to supporting quality education to deliver the relevant Sustainable Development Goals.

Mrs Lumor emphasised that Tullow’s commitment had already yielded dividend with the inauguration of a 16-unit dormitory block at Nsein Senior High School in the Western Region earlier this year.

Mrs Lumor gave the assurance that Tullow remained committed to develop Ghana’s oil and gas resources safely and sustainably for the benefit of all stakeholders.

A Deputy Minister of Education, Ms Gifty Twum Ampofo, reiterated the government’s effort to sustain the Free SHS policy with the conviction that education remained a basic tool for the economic development of any nation.

She said it was worthy to note that the Free SHS policy, since 2017, had benefited from oil revenue generated through activities of oil and gas industries, led by Tullow and its partners.

“One of the fundamental commitments by this government is the quest to encourage public-private partnership for economic development,” she noted, and lauded Tullow for the continuous support, while urging authorities of the school to put the facility to good use.

The Headmistress of the school, Mrs Victoria Usher, expressed gratitude for the intervention, and said the school - established in 1973 with 40 students — now had a student population of over 2,000, and that accommodation on campus had always been a problem.

She, however, appealed to other corporate bodies for further support.

“But for the intervention of Tullow, there was no way the school could handle the huge numbers associated with the double track system,” she said, stressing that even with this, 800 more students needed accommodation on campus.

She said the school still needed a spacious dining hall in order to end the shift system currently being run during mealtimes.