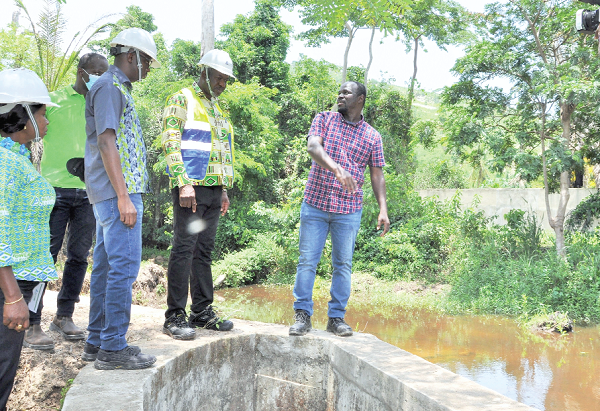 The 45-kilowatt (Kw/h) Tsatsadu Micro-Hydro Generating Station at Alavanyo-Abehenease near Hohoe will be increased to 120kw, the Chief Executive Officer (CEO) of the Bui Power Authority (BPA), Samuel Kofi Dzamesi, has said.

He said feasibility studies and various mobilisations were ongoing and the plan was to start the expansion works next year.

Mr Dzamesi said this when he paid a working visit to the Tsatsadu Micro-Hydro Generating Station last Monday.

The Bui Power CEO said plans to expand the capacity of the power plant was to serve a greater population and also promote other development programmes, including tourism in the area.

For his part, Togbega Atakora said the power station was a fulfilment of a promise by the government, adding that it had the potential to develop the area.

The CEO also inaugurated a GH¢42,440 mechanised borehole for the Alavanyo-Abehenease community.

The water system, which was financed by the renewable power company, comes with an overhead storage tank, with a capacity of 5,000 litres.

“It is my hope that this will go a long way to improve and sustain the Bui Power Authority’s long-standing relationship with our operational communities,” Mr Dzamesi said, before cutting a tape jointly with the Chief of Alavanyo-Abehenease, Togbe Komla Kunde IV, to inaugurate the project.

He said the mechanised borehole might not solve all the challenges facing the community but would contribute immensely to improve the situation of the people.

Mr Dzamesi said the facility was also an overture of many good tidings for the area and gave the assurance that the plan by the BPA and the MP for the area, Peter Amewu to build a centre of excellence at Alavanyo had not been abandoned.

Togbe Kunde expressed gratitude for the borehole and appealed for a replacement of the overhead water tank with a much bigger one to ensure the continuous flow of water in the community with a population of about 3,500.

He said it was time the government considered paying annual royalties to traditional authorities from the power plant to support the community in other development undertakings.

In 2019, the BPA obtained data from the Centre for Scientific and Industrial Research which revealed the source of water from the catchment communities was not safe for human consumption.

Based on that, the BPA took the initiative to provide safe drinking water for the area.

The initial plan was to construct a hand-pump borehole but after further engagements with stakeholders, a mechanised borehole system was recommended.