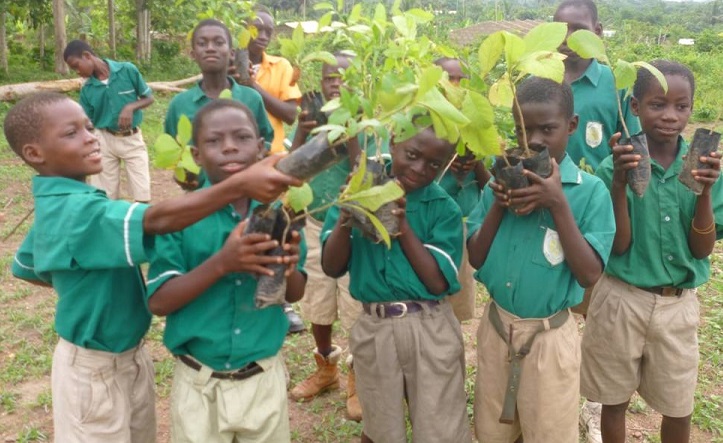 As part of efforts to increase the country’s forest cover, a project dubbed One-child, One-tree has been launched at Agona Swedru in the Agona West municipality in the Central region.

The project is being undertaken by a civil society organisation, the Youth and Environment Club.

The event was attended by pupils and students from basic and senior high schools from the beneficiary districts.

According to the coordinator of the club, Mr Henry Bondzie, about 30,000 children in those districts would be supplied with tree seedlings to plant and cater to grow.

He noted that the country’s rain forest had been destroyed without planting new trees, saying it was for that reason that the children were being encouraged to plant trees, since they would be of immense benefit to humanity.

Mr Bondzie expressed concern over the fact that “the nation’s 8.5 million hectares of rain forest have now been reduced to 1.5 million hectares, for which reason there is the urgent need to safeguard the forest from further destruction”.

The Chief Ranger, Forestry Services Division, Winneba, Mr Benaian Tetteh Asuma, said the indiscriminate cutting of trees was a major threat to the survival of mankind, stressing that “when the last tree dies, the last man will also die”.

He pointed out that the lives of human beings were prolonged due to the existence of trees, for which reason all stakeholders must join efforts in the protection of the forest.

He said if for any reason a tree was cut down, “the important thing is that it must be replanted”.

A lecturer of the University of Education, Winneba (UEW), Dr Gabriel A. Botchwey, called on the government to enforce laws to save the nation’s water bodies and forests from further degradation.

According to him, the punishment for perpetrators of illegal mining should be stringent, such that it would deter others from engaging in such illegal activities.