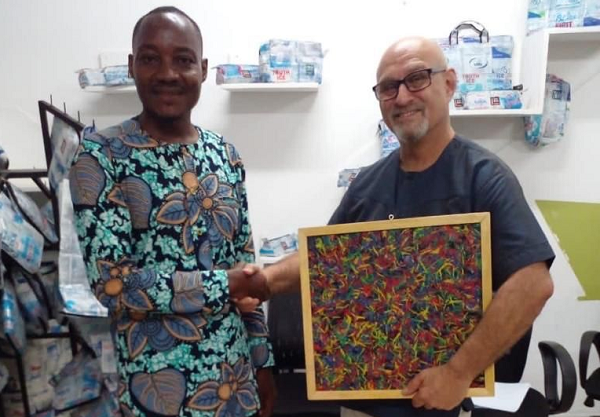 Staff of Trashy Bags Africa have held a farewell ceremony to the founder of the company, Stuart Gold who has formally handed over to the newly formed in-country team.

He received a piece of artwork created from recycled plastic from the company’s factory team in recognition of the pivotal role he played in the company’s life in the past 15 years.

The Trashy Bags Project was started in 2007 by Mr. Gold, who dedicated 15 years to building the company and product range.

He remained with the company since the transformation into its rebranded name-Trashy Bags Africa- in 2021.

The factory manager of the company Elvis Aboluah, commended the outgoing MD for his open-mindedness and forthrightness on varied issues the staff had engaged him on in addressing concerns of the company.

According to him, the staff had been exceptionally fortunate to benefit from the inspiring leadership of Mr Gold, under whose leadership the company had achieved so much.

For his part, Mr Gold thanked all staff and colleagues who believed in him and supported her to performing his role.

Full of smiles, he recounted the gall and glory moments he had at the company during his 15 years of service.

He further encouraged the staff to continue contributing their best to enable the company to grow and prosper.