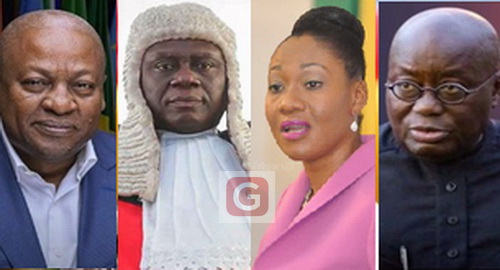 The National Democratic Congress (NDC) and its presidential candidate in the December 7, 2020 general election, former President John Dramani Mahama, on Wednesday gave form to their intentions to petition against the declared results that gave President Akufo-Addo victory.

The NDC officially filed the petition to contest the results at the Supreme Court, following which Chief Justice Kwasi Anin Yeboah is expected today (December 31, 2020) to empanel the justices who will hear the case.

Here are what to expect as the Supreme Court readies to finish with the case in a maximum one month and a half.

Graphic Online Sources are saying that the Chief Justices is likely to empanel a nine -member panel to hear the matter just as in the 2012 Election petition.

Per the new Supreme Court rules, CI 99, the case must be concluded within 42 days after the filing of the petition.

The respondents - the EC and Akufo-Addo have 10 days to respond to the petition,(by January 8).

The Supreme Court will then have to rule on the petition within 42 days after the filing of the petition (February 10).