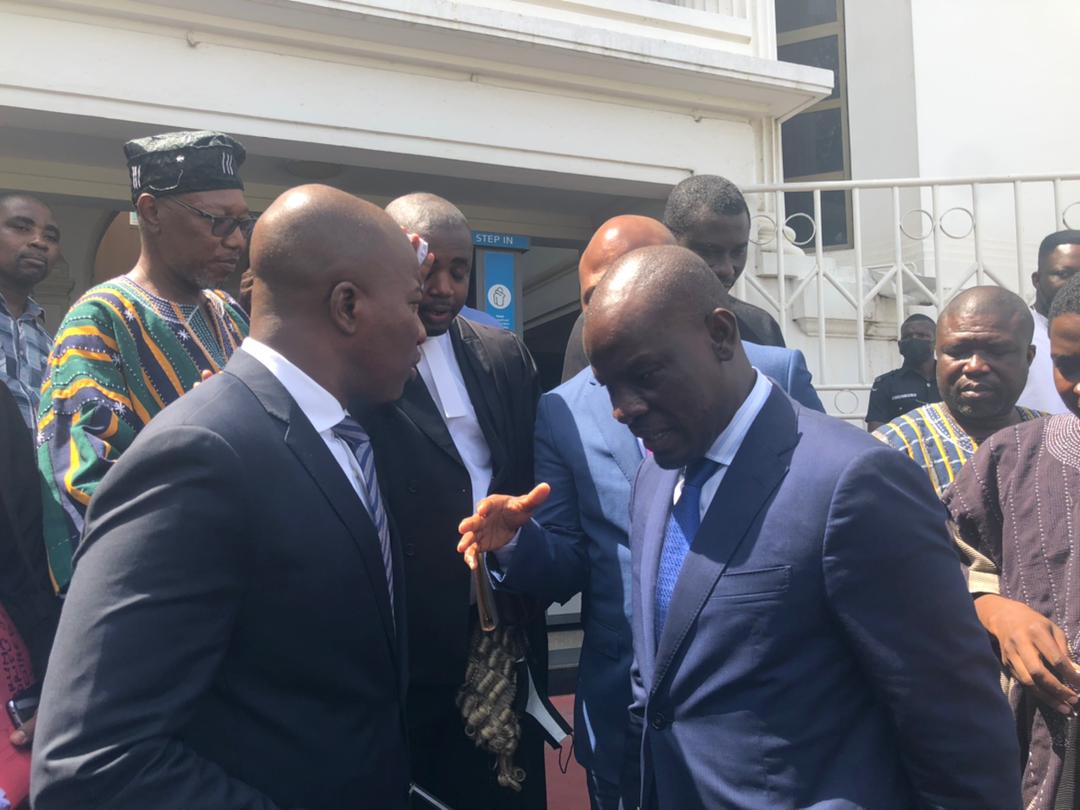 The Supreme Court has dismissed an interlocutory injunction application by three Members of Parliament (MPs) which sought to temporary put the implementation of the electronic transfer levy (E-Levy) on hold.

Led by the Minority Leader, Haruna Iddrisu, the three National Democratic Congress (NDC) MPs wanted the court to halt the implementation of the E-Levy, pending the final determination of their suit challenging the constitutionality of its passage by Parliament.

The other MPs are Mahama Ayariga, MP for Bawku Central, and Samuel Okudzeto Ablakwa, MP for North Tongu.

However, in a unanimous decision yesterday, a seven-member panel of the apex court held that putting an injunction on the E-Levy would occasion irreparable harm to the state and would not be in the public interest.

“In our opinions, greater hardship will be caused to the state in meeting its developmental obligations to the people,” the court held.

According to the court, in the event an injunction was placed on the implementation of the E-Levy and the substantive case failed, the government could not make up for the taxes lost as a result of the injunction.

On the other hand, it was the considered view of the court that the applicants and the public would not suffer any irreparable harm if the injunction application was not granted and the substantive case succeeded.

It held that the court could order the Ghana Revenue Authority (GRA) to refund the E-Levy already collected to the public in the event the substantive case succeeded and the court declared the passage of the E-Levy unconstitutional.

“If the E-Levy is declared as unconstitutional and null and void, the sum deducted could be refunded by the GRA. On the other hand, if the levy is injuncted by this court and at the end the applicants fail in their substantive case, the GRA will be unable to recover the levies applicable.

“The balance of hardship, therefore, tilts in favour of the respondent (A-G). Accordingly, we dismiss the application for interlocutory injunction,” the court held.

After dismissing the injunction application, the court ordered the GRA to keep “accurate records” of the E-Levy, so that the applicants, the public and the state would not be disadvantaged when the substantive case was determined.

Another reason for the dismissal of the injunction by the court was that by law, all acts by the organs of the state, including Parliament, were presumed to have been done without any irregularity until it was determined otherwise.

In that vein, the court was of the view the E-Levy was presumed to have been passed by Parliament without any irregularity and, therefore, putting an injunction on it before the determination of its regularity was not the right position of the law.

The three NDC MPs, who argue that there were 136 or “137 purported” MPs present during the passage of the E-Levy, instead of the required quorum of 138, want the apex court to put the E-Levy on hold until the determination of their suit challenging its constitutionality.

According to them, the GRA would not be able to reimburse the millions who would have already paid the E-Levy, while the 1992 Constitution, the supreme law of the land, would have been undermined.

Counsel for the applicants, Godwin Edudzi Tameklo, had a torrid time trying to convince the seven-member panel to grant the injunction.

In over an hour of submissions, counsel argued that the E-Levy was passed in an unconstitutional manner because at the time it was passed, Parliament did not have the required quorum of 138 MPs.

According to him, all the 136 Minority MPs walked out before the E-Levy was passed and, therefore, Parliament did not have the constitutionally required quorum of 138 members to pass the E-Levy.

The issue of the number of MPs present in Parliament during the passage of the E-Levy elicited a barrage of questions from the Supreme Court justices.

According to the judges, there was no evidence before the court that 136 NDC Minority MPs walked out of Parliament before the E-Levy was passed.

Rather, the judges said that per the evidence before them, which was the parliamentary proceedings filed by the parties, 266 MPs were present in Parliament on March 29, 2022 when the E-Levy was passed.

The judges, therefore, wondered how Mr Tameklo expected them to know the number of Minority MPs who walked out when there was no evidence before them to that effect.

“How do we conjure who walked out? Is it our business to determine an MP who was in the chamber, committee, who had gone to the washroom, etc?” Justice Kulendi asked Mr Tameklo.

“If you say the Minority walked out, how are we to know? Am I supposed to imagine the number of people who are Minority? Who are these people? What is their number?” Justice Torkornoo quizzed.

The court reminded counsel that it dealt with evidence placed before it, not conjectures.

In his submission, the Attorney-General, Godfred Yeboah Dame, urged the court to dismiss the injunction application.

He argued that the number presented by the applicants as the MPs present during the passage of the E-Levy was factually inaccurate, per the parliamentary proceedings.

He argued further that the injunction had no basis because in the event the substantive case failed, the government could not be remedied for the lost revenue.

However, he said, if the injunction was not granted and the substantive case succeeded, the court could order the GRA to refund the money already paid.

“This application is totally incompetent and should be dismissed,” the A-G submitted.