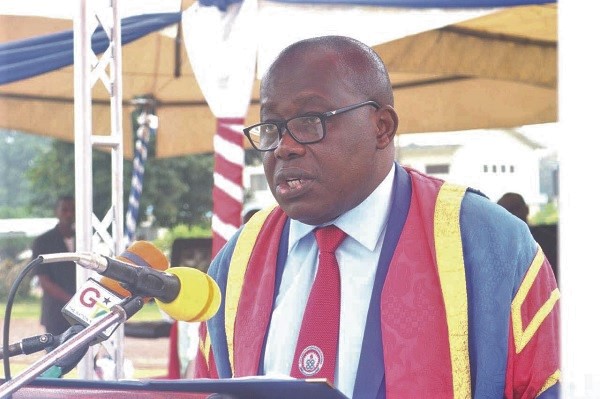 The Supreme Court has quashed the decision of the Winneba High Court that gave the green light for the election of a new Pro Vice-Chancellor of the University of Education, Winneba (UEW).

On November 21, 2019, the UEW elected Professor Andy Ofori-Birinkorang who was the Dean of the Faculty of Foreign Languages Education and Communication (FFLEC) as the Pro Vice-Chancellor of the university.

The university went ahead to organise the election after the Winneba High Court on November 18, 2019, dismissed a suit filed by Dr Frimpong Kaakyire Duku, a senior lecturer of the UEW who had challenged the election in court.

Dr Duku filed a suit with a case that the decision of the Vice-Chancellor, Rev. Fr Professor Anthony Afful-Broni, to nominate three candidates for the election was discriminatory as it denied others, including him, the opportunity to contest for the election.

Dissatisfied with the dismissal of his case, Dr Duku, through his lawyer, Mr Alexander Afenyo-Markin, invoked the supervisory jurisdiction of the Supreme Court by filing a certiorari application for the apex court to quash the ruling of the High Court.

In a unanimous decision, a five-member panel of the Supreme Court, presided over by Justice Jones Dotse, upheld Dr Duku’s application and subsequently quashed the decision of the High Court.

The court further ordered the case to be reheard by the Winneba High Court for determination.

The court is, however, yet to file its reasons for quashing the High Court’s ruling.

The election was slated for Friday, June 14, 2019 at all the campuses of the university.

On June 13, 2019, Dr Duku, who is also a former President of the University Teachers Association of Ghana (UTAG), UEW-Chapter, filed a certiorari application for the High Court to quash the decision of the VC to nominate candidates for the elections.

He also filed an interlocutory injunction on the election pending the final determination of his suit.

It was his argument that the move by the VC was a violation of the university’s statutes and the law establishing the university.

Dr Duku further contended that the decision by the VC was illegal and discriminatory as it denied many others, including him, the opportunity to contest for the Pro Vice-Chancellor position.

As a result of the suit, the university subsequently suspended the election until further notice.

On November 18, 2019, the Winneba High Court presided over by Justice Janapare A Bartels, dismissed the suit without even going into its merits on the basis that it had no jurisdiction to determine the matter.

It was the view of the High Court that the premise under which Dr Duku filed the suit was wrong and, therefore, it had no jurisdiction to quash the decision of the Vice-Chancellor.

It was that ruling by the High Court that has been subsequently quashed by the Supreme Court.

The Supreme Court has effectively held that the High Court has jurisdiction to determine the matter so the suit must be heard on its merit for determination.

The UEW has been involved in many legal tussles and internal wranglings which have led to many agitations on its campus
In July 2017, a former Vice- Chancellor of the university, Prof. Mawutor Avoke, and three principal officers of the university were dismissed over certain alleged infractions.

He challenged his sacking on many fronts, accusing the university of victimisation and witch hunting.

The university authorities, however, refuted his allegations and accusations and said the dismissed officers were subjected to due process.

In March 2019, management of the university dismissed three senior lecturers, including Dr Duku. The rest were Professor Ephraim Avea Nsoh, former Upper East Regional Minister and Principal of the College of Languages Education at Ajumako and Dr Emmanuel Osei Sarpong, a former Alumni President who was representing the alumni on the university’s council.

The university’s management cited misconduct and insubordination among other reasons for their sacking. The three were, however, reinstated in August 2019.