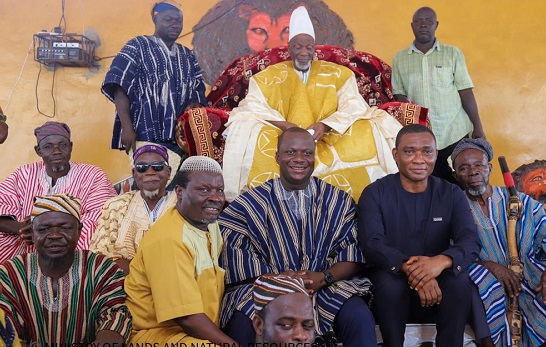 The Minister of Lands and Natural Resources, Mr. Samuel Abu Jinapor, has called on traditional rulers to live up to their role as custodians of the land by helping the government to curb illegal mining and other human activities that destroy the environment.

He said the government recognised the pivotal role the chieftaincy institution played in the development of the country and for that matter it was important for chiefs to mobilise the local communities to rise against the galamsey menace to ensure sustainable use of natural resources.

The minister who started a one-week tour of the five regions in the northern part of the country on Monday (October 4), stressed that the best way to protect the natural resources of the country was for collective efforts, involving all stakeholders, to weed out miscreants who were bent on destroying the environment for parochial interest.

He made that call at the Palace of the overlord of Dagbon, Yaa Naa Abubakar Mahama II, which was the first port of call.

Mr. Jinapor also observed that matters relating lands, forestry and mines could not be  properly managed without the support for the Chiefs.

He said apart from the deposits of gold in parts of the Northern Region that needed to be sustainably exploited, the commercial discovery of iron ore in that part of the country would be crucial to the development of the iron and steel industry.

In that regard, he said the government was determined to exploit the iron ore deposits in Sheini, which is located in the Northern Region to boost the economy.

He called for support from the Chiefs and people in the area to help the realised the vision of President Nana Addo Dankwa Akufo-Addo of building a robust integrated iron and steel industry for the growth and development of the country.

Mr. Jinapor commended the Yaa Naa for his support during the Green Ghana day on June 11, this year when the Lands and Natural Resources ministry mobilised other stakeholders to plant over 5 million trees.

He appealed to the Yaa Naa and other chiefs to encourage their people to monitor the trees that were planted to ensure that they grow up.

The Dagbon Overlord pledged his unflinching support to the minister in the fight against illegal mining and deforestation, particularly, in the Northern Region.

The Yaa Naa said as the traditional leader of Dagbon, he was concerned about the welfare of people, for which reason he would support all good initiatives that were meant to protect the environment from destruction.

He observed that given the devastation illegal mining had caused to land and water resources across the country, he was prepared to give his unflinching support to the minister to win the fight against the menace.

The Yaa Naa also expressed the commitment of all chiefs under him to help curb the menace and restore the vegetative cover of the country.

He commended Mr. Jinapor for the decision to involve chiefs in the renewed fight against galamsey.

In the renewed fight against illegal mining, Mr. Jinapor has been rallying key stakeholders to help weed out the illegal miners.

The minister has already toured the Ashanti, Western, Western North, Eastern and Central,
where he engaged key stakeholders such as the Regional Security Councils (REGSEC), traditional rulers, leaders of Small-scale mining associations and other identifiable groups, to discuss proactive strategies to sustain the renewed fight to weed out illegal miners.

Per the itinerary, the minister's entourage would hold meetings with the REGSEC in the Northern, North-East, Savannah, Upper East and Upper West regions to solicit their unflinching support to fight and win the galamsey fight.

He would also visit mining companies in those regions to learn at first hand their mode of operation.

Mr. Jinapor is further scheduled to visit the palaces of the Yaa Naa, the Nayiri, the Waa Naa, and the Yagbun Wurua in their repective regions to solicit their support to protect the natural resources of the country.

While in the region, Mr. Jinapor would spearhead the sod-cutting ceremony for shea nut Project at Busunu with the German Ambassador and also visit the Mole National Park with the Australian High Commissioner.