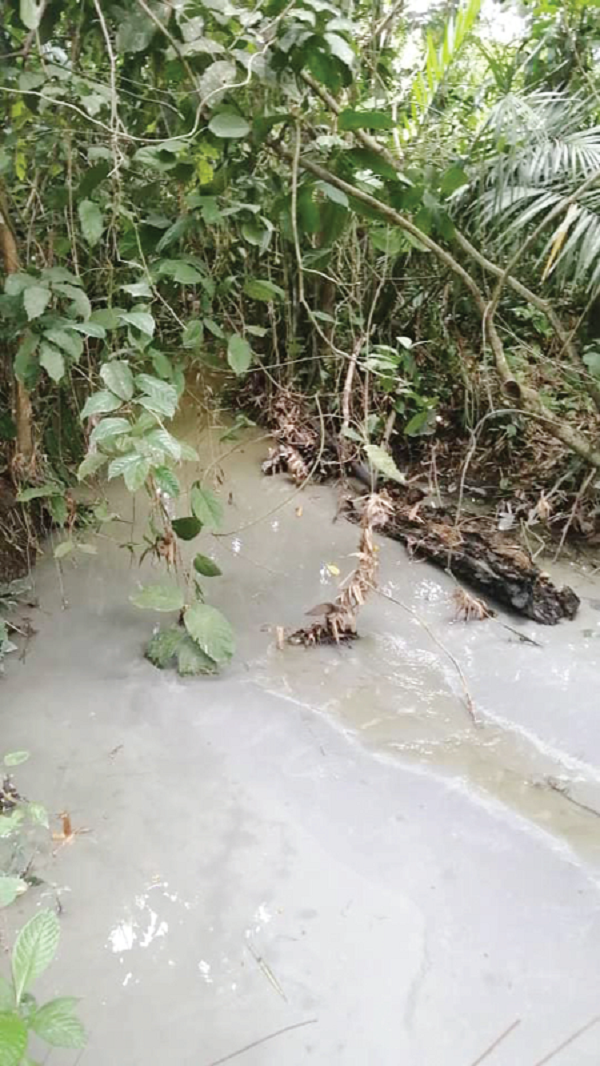 Residents of Akyem Akokoaso in the Akyemansa District in the Eastern Region are sitting on a time bomb and face dire health consequences if nothing is done to stop illegal mining in their community.

Not only have illegal mining activities destroyed the main source of water for the community, the Aboabo River, reducing it to muddy water; the palm plantation which provides palm fruits to produce palm oil for commercial purposes has also become polluted with chemicals.

Again, the use of explosives such as dynamite is threatening the lives of residents, as their buildings have developed serious cracks.

The community has, therefore, appealed to the Minister of Lands and Natural Resources to, as a matter of urgency, extend the exercise to stop illegal mining and save water bodies to the area to save lives and properties.

The Leader of the youth group in the community, Mr Ernest Oteng, in an interview with the Daily Graphic, said the youth had tried to get the law to take its course and stop illegal mining there, but it had yielded no result, hence their call for national help.

“It is not just about the perpetuation of the illegal activities; its impact on the community now and the future is what is agitating the youth - something must be done about it before it gets out of hand,” he told the Daily Graphic.

Observation
When the Daily Graphic visited the area, it observed that the river that runs through a palm plantation had almost dried up and was also discoloured.
It also observed cracks in a number of houses.

Mr Oteng said the problem began with the arrival of a mining firm headed by Chinese, the Jia Xin Company Limited, in 2018, after the company had bought the concession from Ofosua Mining Company Limited.

He claimed that although the licence was for prospecting, the firm had gone into full-scale mining and was working illegally.

He further alleged that in a bid to get quick results from the mining prospect, the management of the Chinese firm introduced the use of poisonous chemicals and also built a channel from the river to the mining site through which waste substances were released back into the river.

Mr Oteng, who is the leader of the Concerned Youth of Akokoaso, said the Chinese, working on the approximately 36.33-square kilometre concession, were operating with an expired prospecting licence, as the letter from the Ministry of Lands and Natural Resources, dated July 17, 2018 and signed by the then sector Minister, Mr John Peter Amewu, and the District Chief Executive (DCE) for Akyemansa, Mr Paul Asamoah, expired on March 19, this year.

He said as a result of agitation by the youth of the community, the assembly and the Eastern Regional Directorate of the Minerals Commissions had, on separate occasions, directed the Chinese company to stop its activities but they had been ignored.

The Daily Graphic sighted copies of the two letters.

The first one from the Akyemansa District Assembly, dated May 19, this year, signed by the District Co-ordinating Director, Mr Peter K. Tetteh, and titled: “Request to halt your mining exploration at Akyem Akokoaso”, indicated that the exploration licence secured from the Minerals Commission expired in April this year and so the firm could no longer operate and directed it to move its equipment from the site to avoid it being destroyed.

The other letter from the Minerals Commission, dated July 24, this year, signed and stamped by the Eastern Regional Head, the Minerals Commission Inspectorate Division, Senior Assistant Chief Inspector of Mines Mr Joshua Quaye Sowah, and titled: “Stop Work Order Minerals and Mining (Health, safety and Technical Regulations 22 (LI 2182 of 2012)”, made reference to a preliminary investigation report and instructed the Jia Xin Company Limited to stop work on two grounds - ongoing investigations into alleged illegal mining activities by the company and the issue of water pollution by the company’s operations.

“Unfortunately, these interventions have not yielded any results and we have been left with no option but call on the sector minister to intervene by extending the 'Operation Halt' to Akyem Akokoaso,” Mr Oteng said.

He said due to the heavy pollution of the Aboabo River, which serves as the main source of drinking water, for other domestic chores, as well as for small-scale palm oil production at Akokoaso, residents now resorted to using sachet water for their various chores, but that could not be sustained.

“There is no other source of water in the community and now we have to rely mainly on sachet water for our chores, but that cannot be sustained, given the cost,” he said.

He again indicated that the use of explosives such as dynamite had left dangerous cracks on several structures near the mining site, posing a threat to the lives of the occupants of such buildings, as no one could tell when the worst could happen.

Again, he expressed concern about the safety of the people recruited to work at the mine and who, out of joblessness, had obliged.

He explained that recently, some of the youth recruited in the illegal mining activity almost lost their lives when the underground tunnel which had been created caved in at the site.

“But for the timely intervention of some people around, those young men could have perished,” he said.

He showed the Daily Graphic a couple of short videos on how the young men who were trapped in the caved-in tunnel after it had rained had been rescued.

Mr Oteng also said the situation had created an uneasy calm in the community, as the youth pushed for more protests against the managers of the firm, as well as the police for not acting, despite the complaints lodged

“The concerned youth had previously clashed with the miners and the managers of the mine and it resulted in gunshots.

Instead of dealing with the illegal activities, the police rather arrested some of us in the middle of the night, tagging us as criminals.

“This has led to some tension in the community and we appeal to Mr Samuel Abu Jinapor, the Lands and Natural Resources Minister, and the security services to take swift and proactive measures to stop the illegal operation of the Chinese firm before the situation escalates into something else, as we are determined to fight to protect our community and environment,” Mr Oteng emphasised.

When the Daily Graphic visited the mine site, two men met there declined to comment, saying they had no prior knowledge of the team’s presence at the facility.