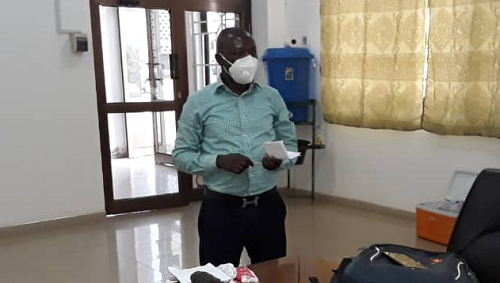 A Clinical Psychologist at the Upper East Regional Hospital at Bolgatanga, Mr Dickson Baba Nsoh has stated that the continuous stigmatization of Coronavirus (COVID-19) patients has the tendency of increasing mental health cases in the Region and the nation as a whole in the near future.

He further expressed regret that “if nothing is done urgently to address the stigmatization issues very soon every family in Ghana might record one mental health case each” which can have serious health implications for the country.

Mr Nsoh made the remark during a day's training workshop on Stigmatization at Bolgatanga for District and Municipal directors of the National Commission for Civic Education (NCCE) in the Upper East Region on Friday,May 22,2020.

The workshop was aimed at among other objectives improving the knowledge and skills of the directors to be able to effectively educate people in their respective communities against the dangers of stigmatising COVID-19 patients.

District directors of the NCCE at the training workshop

The Clinical Psychologist observed that already, some countries in the World have begun recording higher cases of mental illnesses saying Ghana is also not far from experiencing similar situations if people continue to stigmatize COVID-19 patients.

Mr Nsoh advised residents of the Region to “empathize with people who have recovered from the virus and support the authorities to integrate them into the society”.

“Let us encourage and accept the COVID-19 patients in our communities; we should also avoid running away from them if not, they will begin to experience low self-esteem, depression, anxiety and suicidal tendencies”, Mr Nsoh noted.

He further revealed that more than 10 people at the treatment centre at the Upper East Regional Hospital at Bolgatanga have been discharged after they tested negative twice to the virus.

“Let us first understand the virus and how it operates to enable us educate ourselves and bring on board traditional authorities, faith-based organizations and the media to halt the stigmatization", Mr Nsoh stated.

The Upper East Regional Director of the NCCE, Mr P.P.Baba Apaabey noted that the core mandate of the NCCE as an independent State institution is to undertake citizenship education, a function it has delivered since 1993.

Upper East Regional Director of the NCCE,Mr P.P.Baba Apaabey interacting with the media during the training workshop at Bolgatanga

“While we have well cut out flagship programmes under 15 thematic areas that have occupied us in times past, the commission nonetheless has responded to issues of COVID-19 pandemic"the director pointed out.

He said the NCCE has brought on board Ms Matilda Agamu, the first COVID-19 patient in the Region who recovered from the virus to help intensify the campaign against stigmatization in the various communities.

Mr Apaabey used the occasion to express gratitude to the Church of Pentecost for releasing a cinema van to help educate residents in the 15 municipal and districts of the Region on the pandemic.

He also thanked the Municipal and district assemblies in the Region for their collaboration and support to the NCCE to help educate people on the pandemic.

The Deputy Upper East Regional Director of the NCCE, Mr Victor Nuworkpor observed that people must help combat the spread of the virus itself and not to stigmatize the COVID-19 patients because by doing that it leads to isolation, emotional disorder and low self-esteem among the patients.

He said the NCCE is doing all it can to help people fight the virus and not to fight the patients.

The Builsa South District Director of the NCCE, Alhaji Alhassan Bukari noted that in spite of the logistical constraints, the commission was already visible on the ground doing a lot in the area of educating the public against stigmatisation.

Alhaji Bukari who is also the dean of the NCCE directors in the Region, said in some difficult moments some of the directors have been using their personal resources to support educational campaigns even before the pandemic hit the country but sadly their efforts are not being recognized by some people.