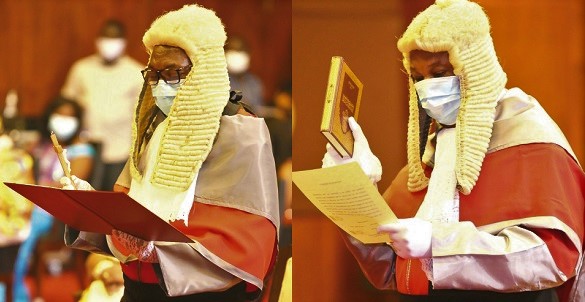 President Nana Addo Dankwa Akufo-Addo yesterday swore in two Justices of the Supreme Court, with a call on them to ensure strict application of the laws of the land in the discharge of justice.

He told the two Justices - Clemence Jackson Honyenuga, 67, and Issifu Omoro Tanko Amadu, 62, that the judicial oaths they had taken must be followed to the letter.

He also urged them to execute their work without fear or favour, affection or ill will, and also without recourse to the political, religious and ethnic affiliations of anybody.

President Akufo-Addo stated this after he administered three oaths - allegiance, judicial and secrecy - and presented the instruments of office to the two Justices at separate events at the Jubilee House.

Until their appointments, Justices Honyenuga and Tanko served on the Court of Appeal.

President Akufo-Addo said when anyone fell foul of the law, it was the expectation of society that the person would be dealt with accordingly and, therefore, urged law enforcement agencies to apply the law in consonance with the true meaning of the concept of equality before the law.

In apparent reference to what happened in Parliament during Justice Honyenuga’s vetting where the Minority accused him of being partisan for calling for his re-election, President Akufo-Addo said: “I know you had a somehow difficult week in the run-up to today; happily you comported yourself in a dignified manner and I can only urge you to overlook these events which is a mere blip on your public career and dispense justice in accordance with your conscience and the rule of law.”

He expressed the hope that he would help strengthen the nation’s constitutional and other jurisprudence in the Supreme Court.

The President observed with delight that Justice Tanko was the first Muslim to be appointed to the Supreme Court.
President Akufo-Addo said he was excited to be the President under whose watch such a historic feat was chalked up.

He said it was not surprising that the National Chief Imam, Sheikh Osman Nuhu Sharubutu, was at the event.

The President said Justice Tanko worked as a lawyer in Nigeria for 19 years, formed his own firm in 1997, was appointed to the High Court in 2008, and four years later into the Court of Appeal.

President Akufo-Addo noted that as expressed by Article 129 of the Constitution, the Supreme Court was not bound to follow decisions of any other court, including its own, and shall have all the powers, authority and jurisdiction vested in any court established by the constitution or any other law.

He said with all other courts bound to follow decisions of the Supreme Court on questions of law, it was critical that the justices of the apex court possessed sound knowledge of the law and of precedent.

“The situation where judges proffer judgement on basis of decisions from lower courts and cite them as law was not acceptable,” the President added.

Both Justices Honyenuga and Tanko thanked God for His mercies and the President for the honour done them and gave an assurance that they would discharge their duties in accordance with the supreme law of the land.

They also expressed appreciation to the Judicial Council, the Council of State and Parliament for granting them the mantle to serve.