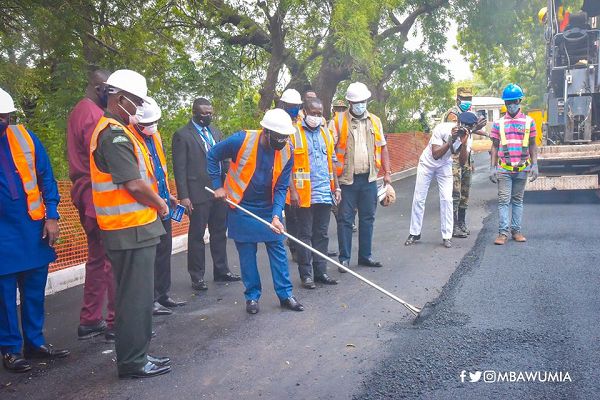 The Vice-President, Dr Mahamudu Bawumia, yesterday cut the sod for the upgrading of roads in the barracks of all the garrisons in the country.

The ceremony, which took place at the Burma Camp in Accra, was in fulfilment of the government’s declaration of 2020 as ‘the Year of Roads’.

He said the Ministry of Roads and Highways started the rehabilitation of roads within the various barracks in 2016 and those that benefited were Myohaung Barracks and  Air Force Base in Takoradi; Uaddara Barracks and Central Command in Kumasi; Kamina and Bawa Barracks in Tamale, and the Volta Barracks in Ho.

He, however, noted that the rehabilitation did not cover the inner roads and that yesterday’s ceremony marked the beginning of the upgrade of the inner roads, which would ensure that the remaining roads in the barracks had asphaltic overlay.

Dr Bawumia noted that the government’s efforts to build massive, broad-based infrastructure across the country were aimed not just at improving the lives of the ordinary citizens, but formed part of a drive to build a modern, inclusive economy within a fast growing country.

He stated that while every government was expected to provide some infrastructure for its citizens, it took a visionary leader like President Nana Addo Dankwa Akufo-Addo, to craft and implement policies that ensure holistic national development.

“Apart from roads, government is very busily implementing other major pieces of infrastructure across the country in the education sector, health, water and sanitation, aviation, railways, ports and harbours and so on,” he said

The Minister of Defence, Mr Dominic Nitiwul, said the upgrading of the roads in all garrisons indicated the importance the government attached to the welfare of the Ghana Armed Forces.

He commended the President for his personal commitment to the rehabilitation of the roads, and the provision of infrastructure in general as well as retooling the Ghana Armed Forces.