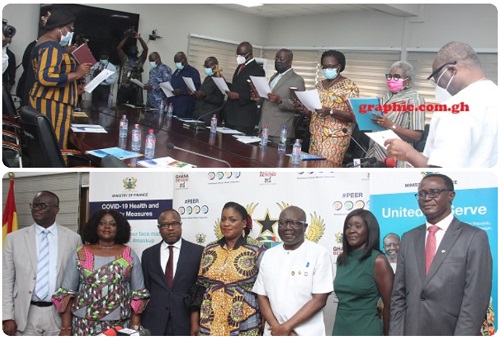 The Minister of Finance, Mr Ken Ofori-Atta, has inaugurated the governing boards of three institutions whose work is critical to the financial services sector and the revenue mobilisation efforts of the government.

They are the Securities and Exchange Commission (SEC), the Social Security and National Insurance Trust (SSNIT) and the Ghana Revenue Authority (GRA).

At the inauguration of the three boards at separate ceremonies in Accra yesterday, Mr Ofori-Atta tasked them to deliver strong, transparent and responsive institutions to support the government’s developmental agenda.

For the SEC, Mr Ofori-Atta urged the board to work with the management to deepen the commission’s role in all financial sector engagements and also work with the Ministry of Finance to achieve success as quickly as possible.

“I am confident in the quality of the membership of the SEC Board. Your varying degrees of expertise leaves me with no doubt that your board will live up to expectation.

“Teamwork will ensure that the board meets the expectations of the government, industry and the public,” the minister added.

Mr Ken Ofori-Atta (middle), Minister of Finance, administering the oath of office to the new board members of the Securities and Exchange Commission

To the SSNIT Board, he said it needed to act in the interest of contributors by delivering a strong scheme capable of meeting the aspirations of the workforce.

He observed that under the leadership of the previous board, there was a holistic restructuring of the operations and the benefits divisions of the trust.

Mr Ofori-Atta added that the trust prioritised the use of data analytics to drive operational excellence and decision-making, saying: “As it stands, there is a data management unit at each SSNIT branch.”

As of December last, the unaudited financial report of SSNIT showed an increase in net assets from GH¢8.05 billion in 2016 to GH¢11.35 billion, he said.

“I believe the task for the reconstituted board is laid out clearly. Unlike the previous board, you are taking over a trust that has become increasingly transparent, with improved relationships with its stakeholders that pursue optimal investment opportunities.

“You must work together to go beyond your predecessors and align your activities with our three Cs (completion, consolidation and continuity),” Mr Ofori-Atta said.

To the GRA Board, the Finance Minister noted that work had already started on transforming the authority by streamlining its business to address the limiting bureaucracies to ensure easier tax compliance.

He said it was imperative for the members of the board to ensure that the initiatives were continued to the point of completion and the GRA‘s orientation transformed into a truly service-oriented organisation.

“I assure you that the Ministry of Finance will support you as you go about creating a fit- for-purpose GRA capable of mobilising the needed resources to support Ghana’s transformation, thereby creating jobs for our youth, boosting economic growth and supporting the country's stability,” Mr Ofori-Atta said.

Speaking at the inauguration of the SEC Board, Mr Amoa said the commission achieved some great strides in the past four years, saying that could not have been possible without the support of the Ministry of Finance.

He said the board members were equal to the task, considering their diverse backgrounds, and, therefore, gave an assurance that with a common will, the board would deliver on its mandate.

For the SSNIT Board, Ms Ohene said the new trustees would make decisions in the best interest of beneficiaries of and contributors to SSNIT.

“As new members of the board, we are fully aware that Ghanaian workers are also entrusting their future to us. There are about 250,000 pensioners who expect us to manage the trust to ensure that their pension will be uninterrupted and have a reasonable value for the rest of their lives,” she said.

“We will stay faithful to the tenets of Act 766 and ensure that all stakeholders are involved, while being aware of changing needs and aspirations, going forward,” she added.