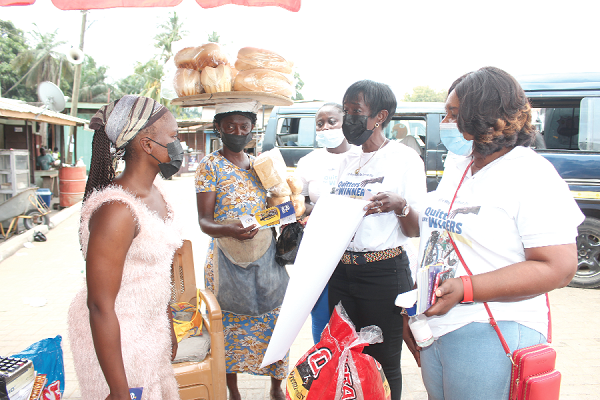 • Mrs Delese Mimi Darko (2nd right), CEO of FDA, and Mrs Olivia Boateng (right), the Head of Tobacco and Substance Abuse of FDA, educating some traders at Nsawam on the effects of tobacco use Follow @Graphicgh

The Chief Executive Officer of the Food and Drugs Authority (FDA), Mrs Delese Mimi Darko, says there is no proof that smoking of water-pipe tobacco, commonly called shisha, and electronic cigarettes are safer compared to the regular cigarette sticks.

“Do you know that an hour’s session of shisha amounts to smoking 100 to 200 sticks of cigarette?”

“It really saddens my heart to see well known people in society recklessly smoke shisha on social media platforms just to be in the trends. “What do we think we are teaching our future generation?”

“As role models, we all need to support and play our role to fight this global tobacco disease pandemic,” Mrs Darko said.

Shisha — also known as hookah — is tobacco that is usually fruit-flavoured, and smoked through a glass-bottomed pipe filled with water.

The FDA boss was speaking yesterday at the national commemoration of the 34th World No Tobacco Day at Nsawam in the Eastern Region where the FDA organised a variety of activities to sensitise the public against the use of tobacco and its associated products, including shisha and electronic cigarettes.

World No Tobacco Day is marked on May 31 of every year by the World Health Organisation and its global partners to highlight the harmful and deadly effects of using tobacco and to discourage its use.

This year’s celebration was dubbed: “Commit to Win”.

The Ghana exercise also marked the beginning of a year-long campaign by the regulatory agency to support people who wanted to quit tobacco use.

The campaign, which dovetails into the World Health Organisation’s (WHO) Digital Access Initiative for Quitting Tobacco project, will offer enabling access to cessation services through referrals and equipping tobacco users with the necessary information to dissuade them from the act.

The leadership and staff of the FDA visited the Nsawam Market, the main lorry park and some smoking bays, and boarded passenger buses to interact with the people on the dangers of smoking and using tobacco in any shape or form, while posting flyers at vantage points to create awareness.

Mrs Darko bemoaned the current trend where tobacco use was higher among young female adults than males, according to the latest Ghana Youth Tobacco Survey.

Alluding to the Tobacco Atlas Ghana, she said an estimated 75 men died every week from smoking cigarette and other tobacco products in Ghana, with over 807,600 people engaged in the habit.

The WHO Regional Director for Africa, Dr Matshidiso Moeti, observed that many governments were confronted with industry threats and legal actions to weaken their measures against the use of tobacco.

He called on the youth to join the fight against the “tobacco pandemic”, and urged “celebrities and influencers to reject all forms of tobacco industry sponsorship”.

“I urge all governments to implement comprehensive tobacco control policies as outlined in the WHO framework Convention on Tobacco Control to save lives and reduce healthcare costs,” he added.

The Minister of Health, Mr Kwaku Agyemang Manu, noted that tobacco cultivation affected development, saying it was estimated that growing and production of the substance used 4.3 million hectares of land resulting in substantial deforestation.

“The use of pesticides and fertilisers in tobacco growing can be toxic and pollute water with significant climate change implication,” he stated.

He, therefore, urged the public, particularly the media and health professionals, to intensify the campaign against the substance.