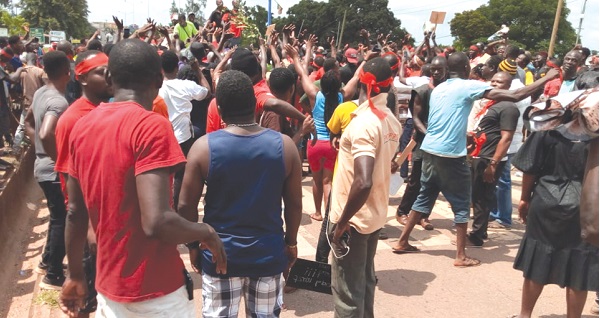 Hundreds of residents at Kotokrom, New-Dormaa and Yawhima communities in the Sunyani municipality, last Monday staged a peaceful demonstration in the area to protest the deplorable state of the 17-kilometre New-Dormaa-Chiraa Highway.

The demonstrators included members of the concerned Tipper Truck Drivers Association (TTDA) and other transport unions and some residents living along the Sunyani-Chiraa road.

During the protest march meant to draw the attention of the government and city authorities to the deplorable and dusty nature of the road, the demonstrators held placards with inscriptions such as “we need roads not COVID-19 drugs”, “Yawhima, Kotokrom deserve better”, “fix the road now” and “our chiefs must talk now” among others.

The demonstrators later marched to the Bono Regional Coordinating Council (RCC) to present a petition to the Regional Minister, Justina Owusu-Banahene.

In the petition signed by the Chairman of the Conveners, Isaac Kumi Boateng, the residents said the National Democratic Congress (NDC) awarded the contract for the road construction in 2016 before it left office.

It said in December 2016, the New Patriotic Party (NPP) took over and reiterated its commitment to ensuring that the project was completed to ease the flow of traffic.

They said it was unfortunate that under the current President, Nana Addo Dankwa Akufo-Addo, no commitment had been shown to complete the road.

The petition said it was in that vein that residents were out on the streets to register their dissatisfaction about the unpleasant situation that they found themselves in.

It added that the deplorable nature of the road was causing irreparable and excessive damage to their vehicles in general, taking into account the high cost of spare parts.

They mentioned the frequent road accidents that posed danger to residents, pedestrians and commuters.

The situation, according to them, had created a fertile ground for criminal activities in the area.

They, therefore, appealed to the government to, as a matter of urgency, intervene for the contractor to come back to site to complete the project. 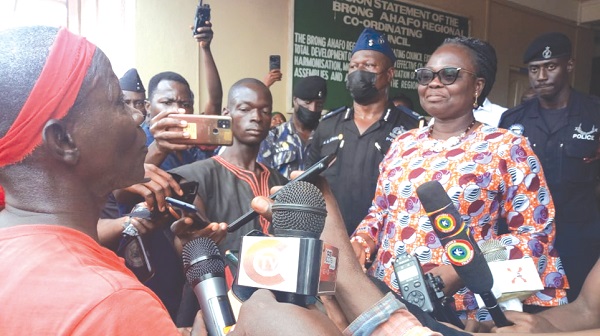 When the Daily Graphic visited the Chiraa Station during the demonstration, hundreds of passengers travelling to Techiman, Wenchi, Kintampo, Nkoranza, Chiraa, New-Dormaa, Yawhima and Kotokrom for official and commercial activities were stranded.

Passengers travelling to Tamale and Wa were also stranded.

This is not the first time residents of the communities have protested against the bad nature of the Sunyani Dormaa-Kotokrom road.

They vowed to embark on more protests to compel authorities to fix their road since the situation was making life unbearable for them.

In May 2019, residents of the area staged an unlawful demonstration which resulted in the arrest of 46 of them.

The demonstrators were arrested for unlawful assembly, assault of a public officer and causing unlawful damage to two police vehicles, with registration numbers GP 3757 and GP 4939.

The police officers had to fire warning shots to disperse the mob who pelted them with stones and other objects leading to some of the demonstrators sustaining injuries.

In the process, the windscreens of two police vehicles were smashed. The police, however, succeeded in freeing their colleague from ‘custody’.

The New-Dormaa-Chiraa stretch, particularly the Kotokrom-Yawhima section of the road is bumpy, riddled with potholes and dusty, threatening the health of residents living along that stretch.

The nature of the road makes driving difficult and dangerous, with its attendant adverse effects on the health of commuters and vehicles.

For more than 10 years, residents of Kotokrom, New-Dormaa and Yawhima and other commuters have had to contend with the dusty and deplorable nature of the road.

The New-Dormaa-Kotokrom-Yawhima road is a dual carriageway. However, only one side of the deplorable road has been opened and is currently in use.

Prior to the 2020 election, contractors were seen busy working, but just after the elections, the contractor left, leaving the road to deteriorate further.