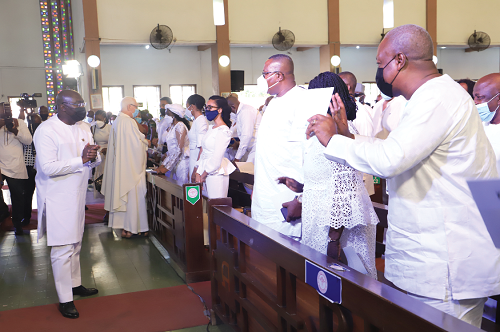 The family of the late former President Jerry John Rawlings was yesterday joined by the Vice-President, Dr Mahamudu Bawumia, and other well-wishers at a thanksgiving Mass held at the Holy Spirit Cathedral at Adabraka in Accra to mark the first anniversary of his passing.

The cathedral was almost full with family members and many of the attendees in white apparel.

The widow, Nana Konadu Agyeman Rawlings, and her children looked sombre throughout the Mass.

The Metropolitan Archbishop of Accra, Most Rev. John Bonaventure Kwofie, who officiated the two-hour service with other clergy, prayed for the family and the nation.

He eulogised the former President for his dedication and zeal towards the nation’s development during his 19 years as head of state.

The archbishop stated that Mr Rawlings abhorred injustice and corruption, virtues he stood for, till he joined his Maker. ‘God will continue to bless him’, he said.

Delivering the homily, on the Bible verse Ecclesiastic 3:1-11, Reverend Father Anthony Asare said the farther one travelled in the journey of life, the greater the realisation that the world was not one’s home and therefore, people must watch where they invested their hearts and energy in life.

He said time was a key element of life and that everything took place chronologically as time set a limit to every human endeavour.

Encouraging the family and the nation to give the troubles of their heart concerning the death of Mr Rawlings to the Lord, Rev. Fr Asare said: “Let us be consoled on the Lord’s presence in our pain’’.

In a message from the family, the first daughter of the late former President, Dr Zanetor Agyeman-Rawlings, recounted events that heralded the news of the death of her father last year saying as the news spread, the reality of the loss dawned on them.

She said the family had experienced 12 difficult months having to deal with the knowledge that the man, who was always there for them, was not with them anymore.

She thanked Ghanaians and the international community for their immense support to the family in those difficult moments.

The legislator also touched on the ideals of probity and accountability, which she said, were not just popular with his father but more importantly, he stood for those ideals as he never stopped his crusade on fighting corruption.

‘Your loss was a loss to the whole country and the pain was one felt by most Ghanaians’, she said.

Later at the graveside at the military cemetery at Burma Camp, the Vice-President laid a wreath on behalf of government and the people of Ghana while the widow and her children laid another on behalf of the family.

The former president died on November 12, last year after a short illness at age 73 at the Korle Bu Teaching Hospital and was buried on January 27, 2021.