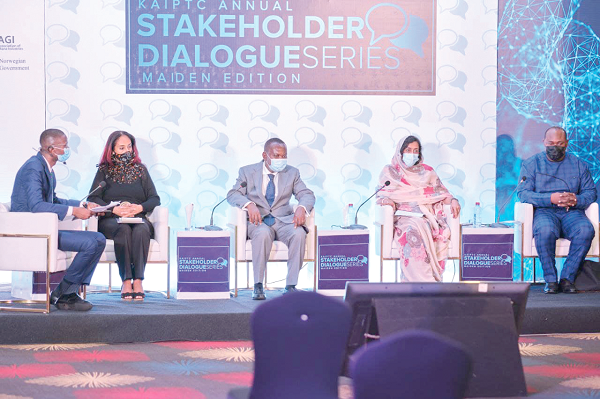 Stakeholders at a dialogue series on the African Continental Free Trade Area (AfCFTA) and Private Sector Development have called for the establishment of strong structures that will ensure that the single African market concept for goods and services is a success.

The participants observed that the private sector had a key role to play in achieving the goals set out by the AfCFTA.

The event was put together by the Kofi Annan International Peacekeeping Training Centre (KAIPTC), in collaboration with the Association of Ghanaian Industries (AGI), and sponsored by the governments of Germany and Norway.

It was on the theme: “The African Continental Free Trade Area (AfCFTA) and the Private Sector: Towards Effective and Sustainable Peace”.

The dialogue was aimed at promoting a joint effort to mitigate the impact of insecurity on businesses, as well as ensure that the business community played an integral role in sustaining peace and security.

Representatives from the private sector, civil society organisations (CSOs), development partners, government agencies and regional and international organisations participated in the dialogue via a virtual platform, with a limited number of persons participating.

The Technical Advisor in charge of Multilateral and Regional Trade at the Ministry of Trade and Industry, Mr Anthony Nyame Baafi, said the AfCFTA was expected to significantly promote peace and security through regional integration and cooperation.

He said if the trade pact was implemented efficiently and effectively, it would boost intra-African trade, stimulate investment and innovation, foster structural transformation, improve food security and enhance economic growth and export diversification.

Ghana’s overriding objective, he said, was to position itself as the new manufacturing and services hub of the continent.

"As we aggressively pursue these objectives, it is an opportune time to pay attention to peace and security dimensions in order to harvest the full range of development dividends sustainably," Mr Baafi said.

He further called on African Union member states to commit themselves to bringing trade processes into harmony and develop a common payment system to accelerate growth on the continent.

The President of the AGI, Dr Yaw Adu-Gyamfi, said businesses could not thrive in an environment of conflict.

A number of economies in Africa, Dr Adu-Gyamfi said, remained fragile and continued to suffer threats of insecurity that set back foreign direct investment.

"I am glad that we are having this discussion aimed at exploring opportunities for promoting sustainable peace and development and stability in Africa, since economic deprivation can provoke conflict," he said.

The Deputy German Ambassador to Ghana, Mr Hans-Helge Sander, said Germany recognised the integral role of the private sector in boosting intra-African trade for the sustainable development of the continent.

He was of the view that improvement in the economies of Africa was key to addressing poverty, unemployment and underdevelopment which, if left unchecked, could drive mass grievances and instability.

He said private sector investments ought to be stable and flourish in non-violent societies in order to unfold their full potential.

Mr Sander said Germany had dedicated  €1 billion of its Development Investment Fund to support the private sector in Africa to promote stability.

Presently, he said, some companies in Ghana and Tunisia that were creating jobs were benefitting from the fund.

In his remarks, the Norwegian Ambassador to Ghana, Mr Gunnar Holm, said while there would be challenges in implementing the AfCFTA, stakeholders should learn from the European example to drive the kind of goal that would not undermine employment, the economy and climate change.

“The establishment of very strong structures is key to driving economic growth and developing the private sector that stakeholders may want to see through the AfCFTA,” he said.

The Commandant of the KAIPTC, Major General Francis Ofori, said for African countries to open up their markets under the AfCFTA agreement and allow duty-free trading of goods and services across borders, there was the need to deepen knowledge and appreciation of contemporary issues.