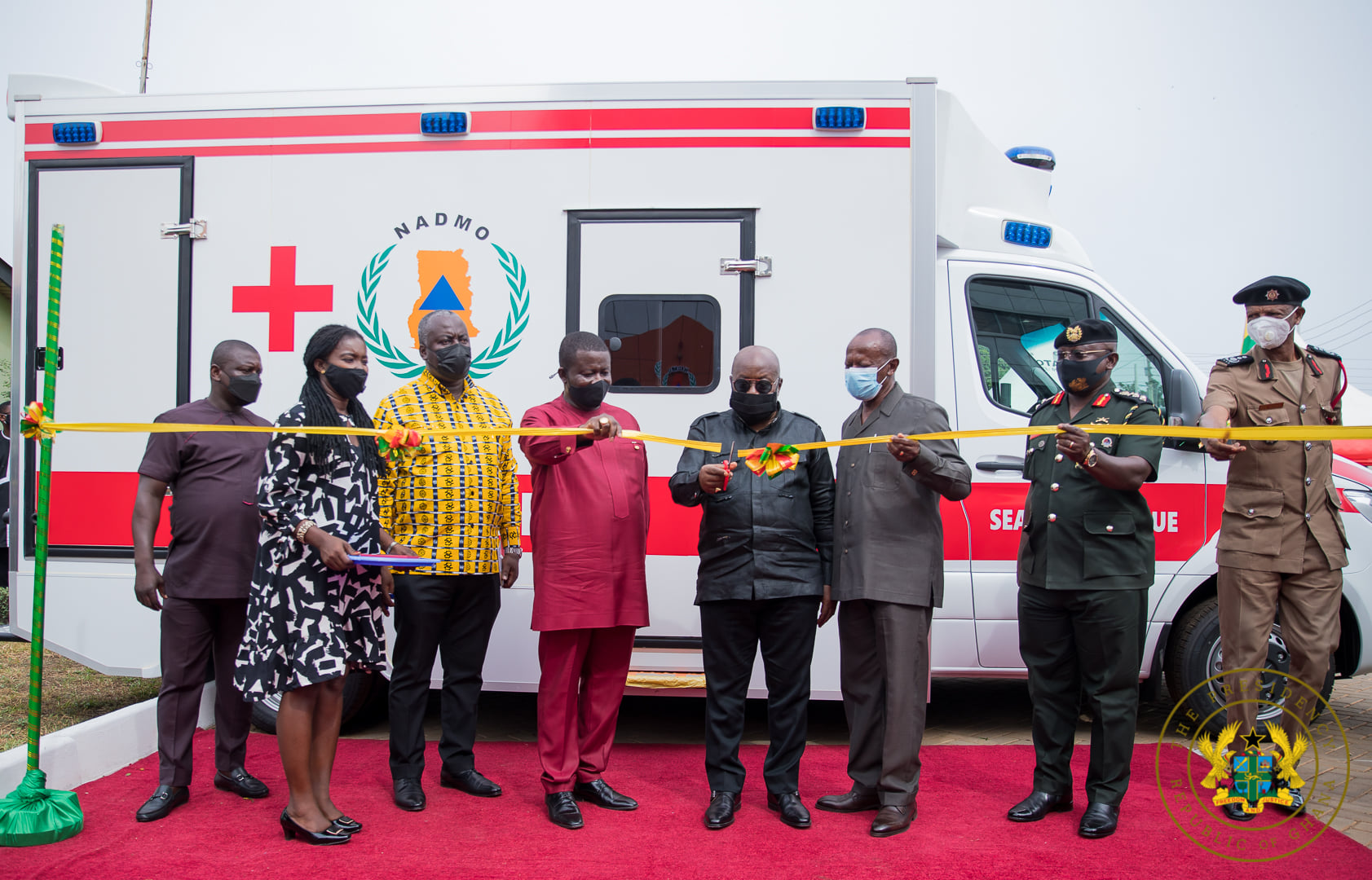 President Nana Addo Dankwa Akufo-Addo has presented 40 vehicles to the National Disaster Management Organisation (NADMO) and assured it of the government's continued commitment to resourcing it to respond timeously and in an efficient manner in times of disasters.

The vehicles presented to the organisation at its headquarters yesterday included a Toyota Land Cruiser, one Toyota Camry, one Toyota Ambulance, one Mercedes Benz Rescue Ambulance and one pay loader.

The President, who was making his first visit to a state agency after being sworn in on January 7, 2021 for his second term, promised to add 32 pickups to the fleet by next month and assured the management of more resources and equipment under his administration.

It was also the first time a sitting President was visiting the NADMO headquarters at Kaokudi in Accra.

President Akufo-Addo cautioned that as the country exited the dry season and welcomed the rainy reason, farmers should be cautious in the process of preparing their lands for the farming season, especially in the use of fire, to prevent bush fires.

Touching on the rainy season with its associated storm that could bring about its own challenge, he urged NADMO to be prepared with the required relief items and go to the aid of those in need and the affected should there be any disaster.

The President said experts had stated that Ghana was susceptible to earthquakes along the southern belt and that the series of tremors that occurred in Accra recently, though with no serious damages, attested to that.

He indicated that in reaction to the recent incident, he had directed the Ministers for the Interior and National Security to constitute a committee of experts to assess the country's state of preparedness should such a disaster recur in the country.

He announced that the Minister for the Interior would be holding a stakeholder conference in April 2021 to study the report and chart a roadmap for the implementation of the recommendations.

President Akufo-Addo encouraged the leadership of NADMO to liaise with the Ghana Education Service to incorporate learning themes of protection against earthquakes and other disasters in the curricula at the pre-tertiary level of educational institutions.

He also urged the organisation to embark on a sustained educational campaign for the entire population in this regard and noted that: “Perhaps, a repetition of the full-scale simulation exercise in June 2018, whose aim was to sharpen the capabilities of all response agencies in the country, is very much in order”.

President Akufo-Addo stated that for the first time, a governing council had been instituted to provide direction for the running of NADMO and a disaster management committee at the regional and district levels had also been established and made functional.

He said he would soon inaugurate the National Disaster Management Committee to superintend government's efforts at managing disasters, emergencies and the realisation of other functions as stipulated in the NADMO Act.

He said the government was making all these investments because disaster prevention and mitigation were directly linked to the sustainable development of any nation.

The Director-General of NADMO, Mr Eric Nana Agyemang-Prempeh, in welcoming the President, said since 2017, hundreds of staff of the organisation had received local and international training to sharpen their skills in identifying disaster-prone areas and offer rescue and assistance.

Mr Agyemang-Prempeh indicated that the organisation had also received logistics and equipment to be able to meet its obligation and commended the President for the presentation of the vehicles.