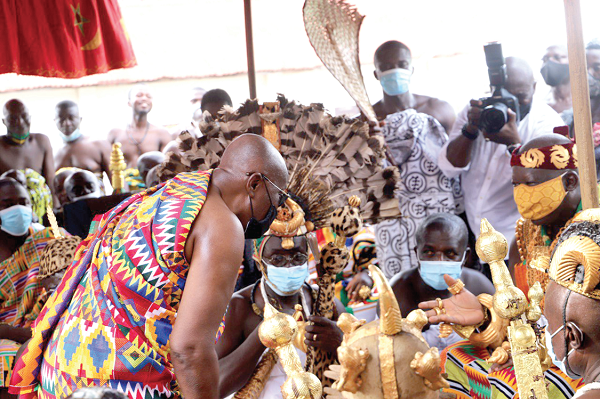 President Nana Addo Dankwa Akufo-Addo has expressed appreciation to the people of the Ashanti Region for their vote to retain the New Patriotic Party (NPP) in power.

He said the government would reciprocate the massive support of the people through development projects as it began its second tenure in office.

The President expressed the appreciation when he joined the Asantehene, Otumfuo Osei Tutu II, at the Manhyia Palace in Kumasi to celebrate the first Akwasidae of 2021 yesterday.

He explained that his visit was in two-fold: first to wish the Asantehene the season’s greetings and also thank the people of the region for the honour done him.

The President had earlier attended mass at the St Cyprian’s Anglican Cathedral in the metropolis.

President Akufo-Addo said the outcome of the elections was an indication from the people to politicians to work in unity for the good of the country.

He said even though what had transpired in Parliament on January 7, this year left much to be desired, “it was for a purpose and paved the way for a successful inauguration”.

He asked for the continuous support of the people of Asanteman for the NPP and the government to ensure that his second term in office was successful.

Typical of Akwasidae celebrations, Otumfuo Osei Tutu did not make a speech.

However, his linguist, Baffour Kantankrakyi, thanked the President for joining the Asantehene to celebrate the occasion.

Akwasidae is celebrated by Asantes, during which the people, led by their chiefs, commiserate with their ancestors.

It is observed on a Sunday once every six weeks.

On the day, the Asantehene, who is the Chief celebrant, sits in state for his chiefs and subjects to pay homage and also receive visitors.

Similar events are held by paramount chiefs in other areas of Ashanti.