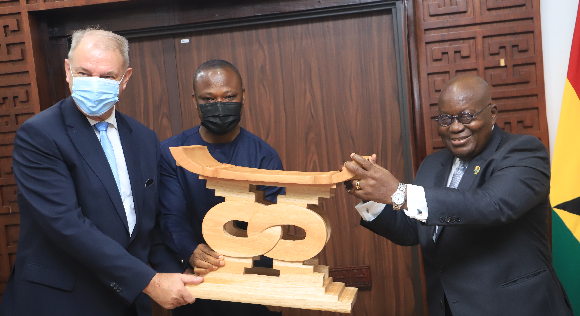 Two envoys who have completed their duty tours of the country yesterday bade farewell to President Nana Addo Dankwa Akufo-Addo at the Jubilee House in Accra.

They are the outgoing Ambassador of The Netherlands, Mr. Ron Strickker, who has been in the country for five years, and his Angolan counterpart, Mr. Augustus Da Silva Cunha.

At separate ceremonies, the two, who expressed their appreciation to the President and the people of Ghana for the warm hospitality, were presented with carved stools as parting souvenirs.

Mr. Strickker described Ghana as a beloved country, and congratulated the President on his re-election as President of Ghana and Chairman of ECOWAS, adding that The Netherlands supported Ghana's election to the United Nations (UN) Security Council.

He commended the government for its handling of the COVID-19 pandemic, saying it had saved a lot of lives, and gave credit to the President for the show of leadership in that respect.

President Akufo-Addo praised The Netherlands for its assistance to the ongoing dialogue between Ghana and the European Union on sustainable cocoa production.

Mr. Cunha mentioned the visit of President Akufo-Addo to Angola and the visit of the Angolan President to Ghana recently, and said both visits helped to strengthen relations between the two countries.

President Akufo-Addo described the ambassador’s stay in Ghana as "a very successful tour of duty".

He spoke of the close ties between Ghana and Angola and the struggle of the two nations to fight the colonial grip, as well as their determination to bring progress and development to their peoples.

"These are the things that continue to link Angola and Ghana, and I'm very happy that the visit by President Gonzalez gave us an opportunity to reaffirm these common commitments that we have and also sign those important agreements to encourage a further strengthening of the relationship between our two countries," he said.