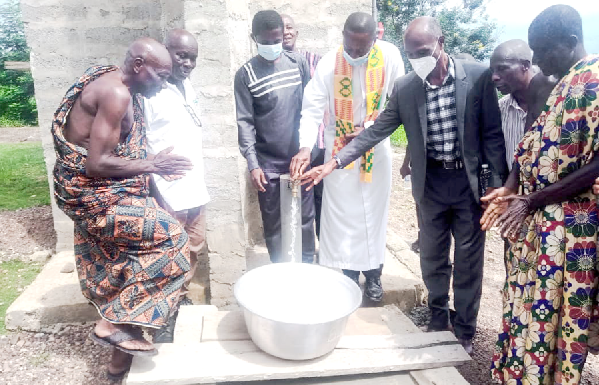 Rev Amoah-Gyasi and opinion leaders of Twifo Eduabeng fetch the first basin of water from the system.

Residents of two communities in the Twifo Atti Mokwa District in the Central Region, Twifo Mampong and Twifo Eduabeng, now have water flowing through their taps as a result of water systems that have been provided for the communities.

The new improved water systems were handed over to the communities last Friday by the Central Regional Caritas office, the charitable wing of the Catholic Church which undertook the projects with some support from the beneficiary communities.

Twifo Eduabeng has never had flowing taps as a result of which they used boreholes and wells. However, for the first time last Friday, the taps flowed, with happy residents expressing their gratitude for the gesture.

"These are not just taps. The taps will impact every aspect of our lives. This is because now the water is potable and has come closer to us. We used to waste a lot of time and energy at the boreholes, which subsequently affected other activities for the day. This is good for us," she added.

Another resident, Ms Janet Oko, said sometimes the boreholes dried up and it was difficult getting water. "Life will be better with the taps," she added.

A third resident of Twifo Eduabeng, Ms Hannah Amankwa, said the young people who wasted time at the wells because they could not draw the water would now be able to go to school early. Both the young and old could not hide their excitement about the water system that would afford them potable water all year round.

A representative of the chief, Nana Yaw Baako, also expressed gratitude for the facility, saying it had come to relieve the community of the stress of searching for potable water.

Both communities have water management committees that would oversee the facilities and ensure they were properly managed.

The Chairman of the Twifo Eduabeng Water Management Committee, Mr S. K. Dadzie, pledged that the facility would be well maintained to increase its lifespan.

Though Twifo Mampong had taps, the community’s water system broke down seven years ago and this compelled them to also resort to wells and boreholes.

The Twifo Mampong water system was donated by family and friends in memory of one Gregory Anthony Howard from Canada, who worked with the Central Regional Caritas office by providing water for communities.

The project was undertaken with funds raised by pupils of the Harrow Public School through the Rotary Club in Harrow Windsor, Canada.

At a brief ceremony to hand over the system, the Omanhene of the Twifo Mampong Traditional Area, Obrempon Appiah Nuamah, said Twifo Mampong had a water system in the community which was undertaken in 1996 but broke down about seven years ago.

The community, he said, had since resorted to wells and boreholes for water.

He thanked the Caritas secretariat for the gesture and he said he was hopeful that more support would be made available to them.

The Director of the Central Regional Caritas secretariat, Rev Fr Stephen Amoah-Gyasi, said the facilities were undertaken to better the condition of the residents.

He urged them to ensure the committees set up to take care of the water systems were prudent in their work.

Rev Amoah-Gyasi called on other agencies to provide places of convenience for the communities to further improve the sanitary conditions in the communities.