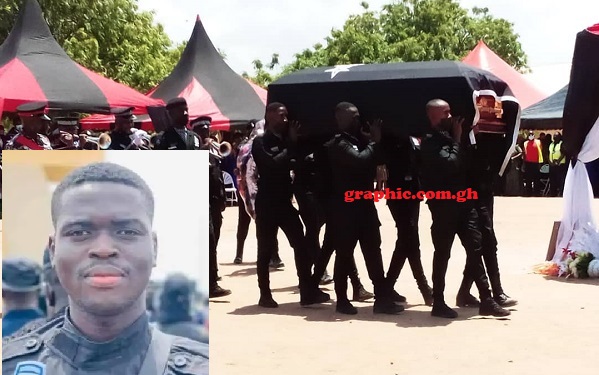 The mortal remains of General Constable Emmanuel Kobby Osei being carried away.

The mortal remains of General Constable Emmanuel Kobby Osei, the policeman killed in a bullion van attack in Accra were earlier this afternoon interred at the Gomoa Nyanyano Cemetery.

This was after a Requiem Mass was held in his honour at the Nyanyano Kakraba Park in the Gomoa East District of the Central Region.

Osei was killed on June 14 this year by armed men on motorbikes at about 11 a.m. while on escort duties.

A woman who raised an alarm in the course robbery operation was also shot and killed in her shop as she attempted to hide.

Mother of Emmanuel Osei being consoled by some family members

At the mass held for Osei were scores of mourners including the Minister of the Interior, Mr Ambrose Dery and senior police officers from Accra and the Central Region.

In his message, Mr Dery indicated the government's resolve to provide security personnel with the requisite accoutrements to fight crime.

He called on the public to assist the police in the fight against crime.

He described the deceased as a hero and patriot.

Earlier in a homily, the Chaplain General of the Ghana Police Service, Very Rev. Fr. George Arthur encouraged members of the public not to renege in their efforts to assist the police with information to fight crime in the society.

According to him, the criminals lived within their midst and so it was incumbent upon the public to expose them so as to ensure law and order in the society.

The late Osei, who was a member of the Special Weapons and Tactics (SWAT) Unit of the Ghana Police Service, was born on August 27, 1995, to Mr Peter Kennedy Atta and Madam Margaret Oforiwa.