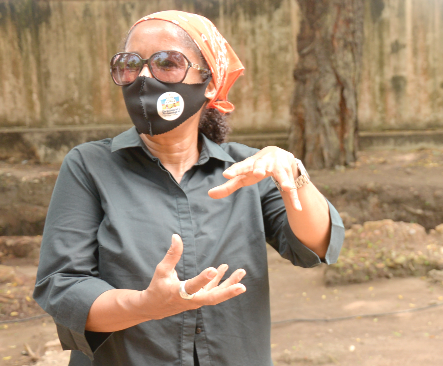 A United States-based Ghanaian archaeological professor has started the fifth stage of a project to document the artefacts and heritage information about the Christiansborg Castle.

Prof. Rachel Ama Asaa Engmann, who is leading the Christiansborg Archaeological Heritage Project, said the exercise had become necessary because the country relied mostly on oral tradition which could be distorted.

The project, therefore, aims at providing rich information about artefacts found at the archaeological site in the castle, also known as the Osu Castle, which would be available to tourists who visit the Christiansborg Castle which is being transformed into a tourist site.

The Director of the Christiansborg Archaeological Heritage Project, who will be working with selected indigenous youth from Osu, underscored the need for the government to invest in archaeological work to help provide documented insights into the country’s past.

It is being funded by the government of France.

Prof. Engmann, who holds a dual citizenship as an English, said the project was unique because all the team members had a personal connection to the site as their relatives either worked at the castle or lived in its environs.

The professor, who traces her ancestory to Governor Carl Gustav Engmann, who lived in the Osu Castle in 1757, told the Daily Graphic that she had learned about the Governor, who spent five years to oversee the sale of captive Africans.

The Governor’s name and when he lived in the castle has been written on a water cistern in the edifice.

The project, which started in 2014 and still ongoing, is in its fifth stage of archaeological excavation.

Many artefacts have been found and profiled for further study while more are being unearthed.

Some of the artefacts discovered included the foundation of what appeared to be a human settlement within the castle with different compartments such as a kitchen.

These artefacts, according to the Prof. Engmann, indicated that there were forms of human activities in an established setting at the excavated area.

An indigene of Osu, Mr Malik Ludric Lutterodt, from the Lutterodt family in Osu, said through the project, he had acquired knowledge of his ancestral history and knowledge of archaeological work.

The project, he said, came with some financial benefits that helped him to pay his school fees as a Public Administration student at the University of Ghana.

For her part, a Technical Advisor in charge of France-Ghana Higher Education Cooperation and Research, Dr Sonia Couprie, explained that the French government sponsored the project because heritage was important for France.

Supporting the project, she added, would ensure that the Ghanaian heritage would become more visible for the country’s tourism sector.