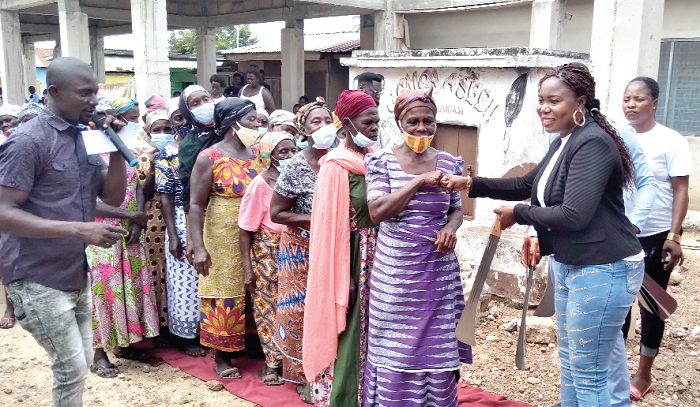 Ms Appoh (right) distributing machetes to some widows during the exercise

A former National Democratic Congress (NDC) Member of Parliament (MP) for Gomoa Central in the Central Region, Ms Rachel Nana Adwoa Appoh, has called on Ghanaians to actively participate in the upcoming census to enable the nation to gather reliable data for national development planning.

According to her, it was important for Ghanaians to avail themselves to be counted in order for the nation to have accurate and consistent data to guide the government and policy makers to meet the needs of the population.

“If the nation is unable to put together a comprehensive data of the citizenry, it would obviously be difficult for the government to properly plan to address the myriad of challenges confronting the country,” she stated.

The exercise formed part of the International Widows Day Celebration which is observed annually on June 23 by the United Nations to draw attention to the voices and experiences of widows and to galvanise the unique support that they need.

As part of the event, she distributed machetes, wellington boots and Knapsack spraying machines to some widows to aid them in their farming activities since the area is predominantly a farming constituency.

Ms Appoh noted that it would be in the interest of Ghanaians that they got involved in the exercise to assist the government to distribute the nation’s resources equitably.

“The importance of this national exercise is that data gathered will form the basis for planning towards spreading development across the entire country,” she said.

Ms Appoh further cautioned the people to desist from verbally and physically attacking field officers as it would defeat the purpose of the exercise.

“Even if you would not allow yourself to be counted due to certain reasons, you should not engage in a fisticuff with the officials in the line of duty,” she said, noting that “it is our civic responsibility as Ghanaians to support the government at all times in its quest to transform the country”.

For his part, a former Constituency Chairman of the NDC in Gomoa East, Mr Peter Kojo Essel, indicated that the previous exercise had been beneficial to the people in the area as it contributed immensely to the creation of the Gomoa East and Central districts out of the then Gomoa District.

“In order not for this area to be discriminated against in the allocation of development projects and implementation of policies and programmes, we must come out in our numbers to be counted,” he stated.