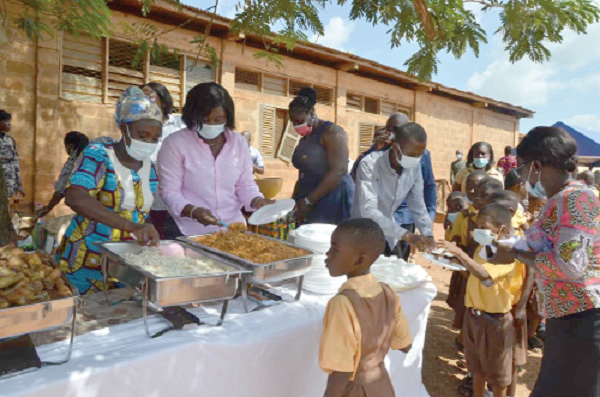 The Central Regional Minister, Mrs Justina Marigold Assan, has reiterated the need for parents to fully support children with special needs to realise their full potential in life.

She said: “It is only when such children are supported and given equal opportunities that they would be able to come out of their shells to make meaningful contributions to the growth and development of the society.”

According to her, it was not the fault of the children that they were born with one form of deformity or the other, and that such children needed to be loved, supported and protected to be useful to society.

Mrs Assan, who was a former Municipal Chief Executive for Agona West, said this while addressing a ceremony during where she feted the staff and school pupils of the Swedru Salvation Army School for the Deaf as part of her birthday celebration.

She wined and dined with the staff and school pupils and also donated an undisclosed amount and items to the school and also to the Mother Cares and Welfare Home at Agona Jacob near Agona Swedru.

“Children born with deformity are human beings who must be given the needed respect and love just like their able-bodied counterparts so that they would be able to pursue their ambitions and become responsible adults,” Mrs Assan said.

The Regional Minister explained, “As a country, we cannot be championing an all-inclusive society by leaving children with disabilities behind.

Every child must be carried along to grow to contribute to the growth of the nation.”

She used the occasion to appeal to corporate bodies and government for support towards the completion of the school’s new site with boarding attached to enhance teaching and learning.

She said there was, therefore, the urgent need for the school’s main site to be completed so that more of such children could be admitted to acquire formal education to better their lives.

The Municipal Chief Executive (MCE) for Agona West, Mr Evans Addison Coleman, commended Mrs Assan for coming to the aid of the children with special needs as it had put smiles on their faces.

He noted that the government, through the municipal assembly, would ensure that their main campus was completed so that they could move from their present location to the new site to improve academic work.

Mr Coleman encouraged the school pupils not to lose hope, but study hard to benefit from many government interventions aimed at transforming their lives.

The headmaster of the school, Mr Emmanuel Yao Nutakor, appealed to Mrs Assan to ensure the completion of the school’s dormitories, staff bungalows and extension of electricity and water to the new site.

He said, “This will lessen the burden of parents and guardians in transporting their children to and from the school on a daily basis.”

The Nifahene of Agona Swedru, Nana Kweku Esieni V, who chaired the ceremony, called for support for children with disabilities to enable them to grow to become better individuals in future.