Otumfuo calls for collaboration to fight against ‘galamsey’ 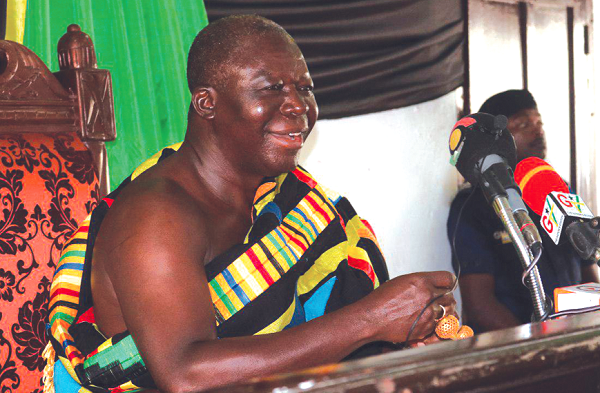 The Asantehene, Otumfuo Osei Tutu II, has called for greater collaboration between traditional rulers and the government in the fight against illegal mining () because one faction cannot stop the menace completely

He said much as the Constitution mandated the government to hold all lands in trust for the people, it should also the fiduciary role of chiefs in protecting the same property on behalf of their people.

Addressing the Ashanti Regional House of Chiefs in Kumasi yesterday, the Asantehene said if chiefs were properly consulted and partnered on such issues within their traditional areas, it would be difficult for any illegal miner to create the impression that he had been sent by any one of them.

The Chief Executive of the Forestry Commission, Kwadwo Owusu Afriyie, who was at the meeting, briefed the House on the current modalities in sharing royalties to chiefs.

Otumfuo Osei Tutu said since district assemblies took 55 of the royalties, it was important that chiefs questioned how the money was expended on development.

He said it was wrong for chiefs not to have a say in what kind of development projects the assemblies undertook since Nananom were the custodians of the lands.

The Chief Executive of the commission announced the suspension of issuance of letters and contracts to individuals with immediate effect to help reclaim damaged lands by operators.

He said the commission had noticed that letters given to legitimate bodies in the reclamation exercise had been abused by fraudsters who used such authority notes to mine in the forest.

He said a committee had also been set up to investigate the payment of stumpage fees and also address the frequency of the release of the royalties to chiefs.

To address the continuous delay in the release of funds from the consolidated account of government, the chief executive agreed with the House on the need to create a separate account to facilitate the easy release of cash to the chiefs.

The Bekwaihene, Nana Osei Kwadwo Ababio, was sworn in as a new member of the House.